Concerning the latest developments on the ground, participants stressed the importance of being fair to the fact in which “history is important in any territorial disputes.”

This year’s South China Sea Conference, which brought together a group of famous speakers from Vietnam and throughout the world, has covered the latest developments on the ground.

Concerns about the arms race, surging “unintended collisions”, legal implications of the San Francisco Treaty on its 70th anniversary, emerging historical evidence, most recent technology, and more were discussed at the 13th South China Sea Conference held on-site and online on November 18-19.

This is the first time the South China Sea Conference is live-streamed on social media and viewers can also participate in the virtual commentary room post-session.

With these exciting updates, the two-day event aims at drawing lessons in history and utilizing them for a better tomorrow as the event titled “Looking back to a brighter future”, marking the participation of nearly 600 participants, including nearly 40 high-profile speakers coming from more than 30 countries, and 90 foreign guests coming from international organizations, including 15 ambassadors.

Covering eight main sessions, the conference provided participants with an opportunity to comprehensively analyze the state of affairs of the South China Sea (SCS) and beyond, discussing the developments in the region and in the SCS from both political and juridical perspectives.

It also highlighted the ASEAN Centrality and the bloc’s vision on the SCS; rising traditional and non-traditional security issues; and measures to promote maritime cooperation, as well as enhancement of security and prosperity of the Indo-Pacific region.

The issues discussed in the sessions focused on two main parts “Looking back” and “to a brighter future”.

The first part discussed the SCS in a changing global landscape. It looked back at developments in the SCS over the past year(s) to further understand the ways that various stakeholders act and explain why the more interest there is in peace, stability, and order in the sea, the greater erosion of trust there seems to be.

For that reason, experts stressed the need to cement the legal order in the SCS. It is widely recognized that UNCLOS sets out the legal framework within which all activities in the oceans and seas must be carried out. The 2016 South China Sea Arbitration Award, a decision of an international judicial body, provides a reference point for interpreting and applying relevant UNCLOS provisions, aside from its direct implications on parties to the dispute.

In addition, the session examined how legal order has been manifested in the South China Sea over the past five years. The discussion includes an analysis on (i) where state practices have developed to either deviate from or endorse the constitutional role of UNCLOS and (ii) how the legal order at sea would continue to evolve.

Be fair to the fact

One consensus that the experts reached at the international conference is that history is important in any territorial disputes. But in the case of the SCS, it is oftentimes interpreted in different ways to suit different interests.

Revisiting the history of the SCS with the view to exploring new research findings and clarifying certain facts, especially during the turbulent times after World War II and during the Cold war matters a lot. Looking back on the Treaty of San Francisco at its 70th anniversary, for example, could be useful to understand the SCS’s history at a critical moment.

Dr. Ding Duo, Associate Research Fellow of National Institute for South China Sea Studies, Deputy Director of Research Center for Oceans Law and Policy, China, was concerned that “The situation in the South China Sea is increasingly complex, volatile, and fragile. The wise choice for regional countries to make the pie of common interests bigger, hedge against destabilizing factors through cooperation.”

Concerning the situation in the SCS, Mr. Derek Grossman, Senior Defense Analyst, RAND Corporation, US expressed that “Over the last decade, China’s growing assertiveness in the South China Sea has increasingly caused concern among its regional neighbors as well as extra-regional states, to include Australia, India, Japan, and the US. Thrilled to be offering my thoughts on all of this SCS conference.”

Furthermore, Vice Admiral Yoji Koda (Retd), Former Commander in Chief, Japan Self-Defence Forces (JSDF), said “We are approaching the most serious crucial point in history whether to make the South China Sea a China’s monopolistic yard or a Human’s Common for everybody.”

Dr.  Lin Ting-hui, Deputy General Secretary of Society of International Law in Taiwan (China), exclaimed that “Without rules, nothing can be done.” 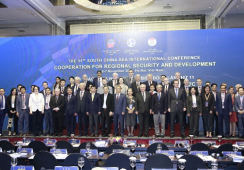 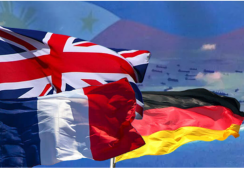