The Hanoitimes - GV Asia aims to become a leading multi-service technology app in the Vietnamese market.

The trial run will last for six months providing services such as GV Bike and GV Car.

According to GV Asia, during its trial period, GV Taxi aims to attract about 8,000 partner drivers and serve 60,000 trips a day. When officially launched, the company will offer delivery, food and taxi services by 2021.

The advantage of GV Taxi compared to other applications is its positioning technology with precision of up to 10 square meters.

The company was licensed by the Hanoi Department of Transport on June 19, 2020 to offer car transport service, according to Director of GV Asia Hoang Quang Manh who said that his company will operate under the transport business model.

The ride-hailing market in Vietnam is highly competitive, creating challenges for new player but GV Asia said it would not compete for market shares with rivals.

GV Taxi will be the sixth Vietnamese ride-hailing app, after Be, Vato, Mailinh Car, MyGo and FastGo.

The ride-hailing market in Vietnam is currently dominated by foreign businesses such as Grab (Malaysia) and GoViet (Indonesia). Some local insiders said that the emergence of domestic platforms such as GV Taxi will diversify options for domestic consumers.

However, in order to compete with foreign companies, the newcomers will have to fight the price war to attract users. If their capital is thin, the business will be kicked out soon. 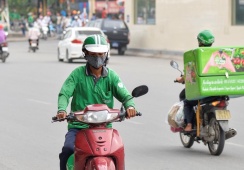 Ride-hailing services temporarily halted from April 1, except for delivery