The Hanoitimes - The fund is aimed to assist member states with vaccine procurement and rollout plans.

The fund will be spent on operating the ASEAN Regional Reserve of Medical Supplies (RRMS) and establishing the ASEAN Center for Public Health Emergencies and Emerging Diseases (ACPHEED), Mr. Minh said.

Announced at the 36th ASEAN Summit under the Vietnam Chair, the fund has received pledges up to dozens of millions dollar from ASEAN member states and its partners including the US, Australia, Japan, South Korea, India, Canada. It stands ready to provide assistance to countries in combating the pandemic.

Regarding to RRMS, Vietnam has pledged to contribute US$5 million in medical supplies.

At the meeting that is the first activity according to ASEAN practices under Brunei chairmanship, Vietnam stressed the need to effectively implement initiatives reached in consensus in 2020.

In terms of building ASEAN Community, Vietnam’s top diplomat said member states should complete the review on the implementation of ASEAN Charter and the ASEAN Community Vision 2025 as well as plans for the vision after 2025.

Mr. Minh proposed ASEAN’s priorities in narrowing the development divide and enhance ASEAN’s competitiveness as a region. Accordingly, Vietnam as the chai of the 2000-launched Initiative for ASEAN Integration (IAI) in 2021, will hold a dialogue on the issue for sustainable recovery and fair development.

Tightening relations with its partners on the basis of ASEAN Centrality is also included in Mr Minh’s proposals.

Other contents included commitments to implementing priorities, initiatives, and programs made earlier.

Top regional diplomats discussed orientations and priorities for the whole year and exchanged on international and regional issues of mutual interest following the theme “We Care, We Prepare, We Prosper.”

They agreed that ASEAN need to consolidate its solidarity, mainly in economic connectivity with internal trade, sustainable development and connection, and activities towards comprehensive plans amid global uncertainties.

So far, all ASEAN member states have suffered from Covid-19 with nearly two million infections and more than 40,000 deaths. In terms of caseload, Indonesia takes the lead with more than 951,000, followed by the Philippines with nearly 508,000, Malaysia ranks third with over 172,000.

ASEAN acknowledged multilateral mechanisms, considering them the most proper way to overcome challenges that the region and the world are facing with.

Among those, the ministers agreed to promote its ASEAN Centrality that mostly covers an open, transparent, inclusive, and rule-based approach, including ASEAN+1, ASEAN+3, East Asia Summit (EAS), ASEAN Regional Forum (ARF), and ADMM+.

Regarding the South China Sea issues, the ministers emphasized constraint, non-militarization, respect to international, and application of international legal practices as solutions.

Contributing to regional peace and stability is each member state’s responsibility that requires common and consistent position with respect to international law, including the United Nations on Convention of the Law of the Sea (UNCLOS) 1982.

They hoped that ASEAN and China would soon resume negotiations on the Code of Conduct of Parties in the South China Sea (COC).

On this occasion, Brunei proposed priorities for ASEAN in 2021 that consist of comprehensive approach towards multilateralism, rule-based structure, emergency response, healthcare, and young people’s engagement for the regional prosperity. 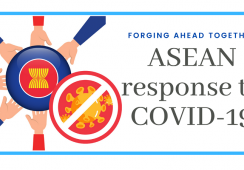