What do you think about Vietnam's prospects for Belgium investment?

Because of Vietnam’s early rise, if compared to other ASEAN economies, and taking advantage of its pro-Western policies and agreements, Vietnam is maybe not the top-ranking ASEAN country for ease of doing business, but it is attracting investors not only from the West but also from other Asian countries such as Japan, Singapore and South Korea.

Belgium is essentially “made of” Brussels, Flanders and Wallonia. The latter territory covers around 60% of the country. They have a quite distinct language/dialect one from another. What I can say and see is that the greater part of Belgian investments in Vietnam are from the Flemish or Brussels areas.

If you are wondering why Wallonia’s investments into Vietnam are lower, it is because Wallonia has less small-medium enterprises (SMEs) that are willing to take the risk of investing into Asia, and the others are multinational companies already.

The Wallonian “hidden champions” who are excellent in their field, often “don’t make the headlines as a pure Belgian investment” because they get acquired quite quickly from other global investors and get absorbed into other conglomerates of mainly American origin.

Other grand investments are made in the supply chain of high-quality food & beverage ingredients that cater to restaurants, factories and retail.

Other projects we see are those typically related to production (automotive components, electronics supply chain and garments finishing).

The average trend is to explore the countries’ potential for trade, so they set up a trading company relatively fast, instead of the previously popular representative office. Or, alternatively and based on their scope, they set up a service entity, also entirely funded and managed from abroad and with local and foreign staff in Vietnam.

Investment trends in Vietnam from Belgium will continue to focus a lot on pharma and chemicals and related products, green technologies and automotive parts industry.

How have the Vietnamese policies related to the sectors facilitated foreign investors in the country?

Let’s see, take green or renewable energy as a first example. Until 2017 renewable energy was not even on Vietnam’s agenda, but by 2019 Vietnam surpassed Malaysia and Thailand in reaching the largest installed capacity of solar panels in Southeast Asia.

This means that foreign technologies are very welcome. Much of Vietnam’s recent success with solar energy can be attributed to feed-in-tariffs (FIT). FITs encourage investment in renewable energy by guaranteeing an above-market price for producers.

Since they usually involve long-term contracts, FITs help mitigate the risks inherent in renewable energy production. The revised FiT came shortly after the Vietnamese government announced that it intends to double its power generation capacity over the next decade. This will increase the proportion of renewable energy to 20% in an attempt to reduce reliance on coal for electricity production.

In late 2019, Prime Minister Nguyen Xuan Phuc approved the outline of the national Power Development Plan (PDP) VIII, which is expected to be completed sometime in 2021. The PDP VIII covers the period of 2021 to 2030 with a vision to 2045 and sets out renewable energy development and investment attraction as two of the key priorities.

We think a merger & acquisition (M&A) is one of the best options to enter the Vietnamese energy market, which is less time consuming and helps the investor gain the local partners’ assets, suppliers, distributors, and so on. However, the investor may not fully be able to control decision making.

Is there any challenge or opportunity for the Belgian companies investing/operating in Vietnam? Why?

Among challenges, infrastructure and logistics could improve (availability of roads, ports, efficiency of airports and logistic performance), which would make a difference in lead time and lower waiting time. The labor quality should improve to meet that of other Asian economies (the labor “score” usually takes into account labor productivity, labor force, labor force participation rate, tertiary enrollment rate and unemployment).

Among opportunities, Europe is the 4th export market of Vietnam and ranks second among the largest exporters to Vietnam. European appliances manufacturers and garments brands are moving to Vietnam aggressively and with them, most of their suppliers from Europe, as well, who are involved in some of the “low tech” processes but also now in relatively more complex segments.

Vietnam’s rules allow for a quick set up of an entity (1.5 months) and preferential tariffs under the framework of free trade agreements such as the EU-Vietnam Free Trade Agreement, ASEAN-China Free Trade Agreemnt and the Regional Comprehensive Economic Partnership. Its corporate income tax is more attractive than Chinese (20%), individual income tax is relatively low, and its' Fitch Outlook is positive.

Investment incentives that will lure more investment from Belgian investors that can include tax breaks, access to credit, research support, and others.

Thank you for spending your time with us. 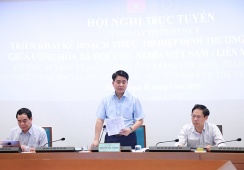