The Hanoitimes - In January, Vietnam imported nearly 4,000 cars worth US$106 million, up 14% month-on-month in volume but down nearly 49% in value.

Car sales in Vietnam are reported at 15,787 units in January, down 53% both month-on-month and year-on-year, according to a monthly report by the Vietnam Automobile Manufacturers Association (VAMA).

Sales of domestically assembled cars reached 9,599 units last month, down 49% compared to the same period of last year, while imported completely-built-units (CBUs) were 6,188 units, down 58%.

The VAMA expected there would not be a significant upturn in February as it is the first month after the Lunar New Year holiday, in which demand for cars often remains at the bottom of the year, evidenced by statistics from previous years.

In January, Vietnam imported nearly 4,000 cars worth US$106 million, up 14% month-on-month in volume but down nearly 49% in value, according to the General Department of Vietnam Customs (GDVC).

The GDVC also attributed the decline in the number of car imports to a long Lunar New Year break.

According to the VAMA, last year was considered a difficult year for Vietnam’s auto market, but also marked positive performances of most local car producers. 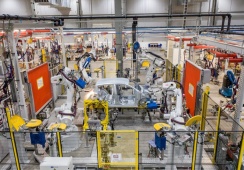