China will grant CNY20 million (US$3 million) and 500,000 vaccine doses to Vietnam, lifting the total Beijing-committed vaccines for Vietnam to 6.2 million, according to the Vietnamese Ministry of Foreign Affairs.

The commitment was released at a talk on Dec 2 between Vietnamese Foreign Minister Bui Thanh Son and Chinese FM Wang Yi in Zhejiang during the Vietnamese top diplomat’s three-day visit to China.

In the pandemic fight over the past two years, China’s localities bordering Vietnam have donated the country vaccines and medical supplies worth millions of dollars.

With regard to vaccine donations, Vietnam has received dozens of millions of doses from different countries with the US being the largest donor, supplying 20.5 million doses thus far, not to mention about $30 million it has pledged to support Vietnam’s anti-pandemic mission.

At the meeting, the two top diplomats discussed measures to solve maritime disputes that require the rule-based approach and on the basis of the UN Convention on the Law of the Sea (UNCLOS) 1982. At the same time, they agreed to speed up the negotiations of the Code of Conduct (COC) for the South China Sea.

They also gave attention to economic ties in which China continues to be Vietnam’s biggest trade partner.

In turn, Wang Yi said China would open its doors to Vietnam’s farm produce and encourage Chinese competent firms to invest in hi-tech projects in Vietnam.

In the first 10 months of this year, the two-way trade reached $133.65 billion, exceeding the 2020 values, with Vietnam suffering a trade surplus, according to the General Department of Vietnam Customs.

Meanwhile, Chinese customs said the two-way trade hit $186,5 billion, up 25% on-year between January and October. It is expected to exceed $200 billion in 2021.

Looking back the bilateral economic ties, Vietnam’s trade deficit with China has grown rapidly since 2001.

Vietnam has become China’s sixth-largest exporter and 11th largest importer, while China has become Vietnam’s largest trading partner for 12 years in a row.

Many of Vietnam’s key export industries, such as textiles, garments, and footwear, still heavily depend on inputs imported from China. Vietnam also relies on China for capital goods, which includes machinery, equipment, vehicles, and tools used to make finished goods.

Vietnam’s heavy dependence on Chinese intermediate and capital goods creates vulnerabilities in its entire production chain, according to Bich T. Tran, PhD scholar at the University of Antwerp.

Sharing about the visit, Vietnamese Ambassador to China Pham Sao Mai said this is the fourth bilateral meeting (both in-person and virtually) between the two FMs in a year.

Bui Thanh Son’s visit to China is aimed to boost the political trust between the two countries and two communist parties, to effectively implement bilateral agreements and consensus reached at the 13th joint meeting held during Wang Yi’s visit to Hanoi in September 2021, and to exchange talks on the further cooperation for the next year, the ambassador noted.

According to the Vietnamese ambassador, there remain shortcomings in the Vietnam-China relationship, such as Vietnam’s widened trade deficit; difficult access of Vietnamese goods to the Chinese market; troublesome customs clearance of Vietnamese goods at the border gates; low-quality Chinese investment projects in Vietnam; maritime disputes, among others. 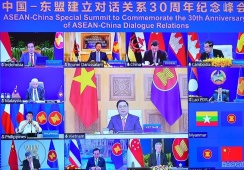 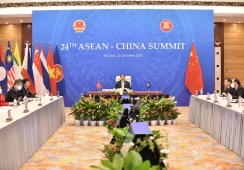