The Hanoitimes - The break would last for four consecutive weeks on fears of the spread of Covid-19 respiratory sickness.

Chairman Nguyen Duc Chung of the Hanoi People’s Committee on Friday decided to close all schools in the city by the end of this month, lengthening the period to four weeks in a row on fears of the Covid-19 epidemic.

It means that more than two million schoolchildren in the city from kindergarten to university will have one more week off and be back to school on March 2.

The chairman’s decision was made basing on the situation of Covid-19 control in Vietnam and following different polls in which the majority of parents didn’t want their children to go school for the moment.

The Ministry of Education and Training has also suggested that schoolchildren should stay home one more week for safety.

Mr. Quy said that the city should be on alert with people in quarantine because it is adjacent with Vinh Phuc province which has 11 people tested positive with Covid-19.

Hoang Duc Hanh, director of the Hanoi’s Department of Health, said at Friday meeting that Hanoi continues to take bold measures against the epidemic such as strict supervision on people coming from the epidemic-hit areas and early recognition of suspected cases.

“Because the epidemic remains complicated in China and is at risk of spreading,” Hanh said.

So far, Hanoi has not found any people infected with Covid-19.

At present, 15 out of 16 have recovered and been discharged of hospital. 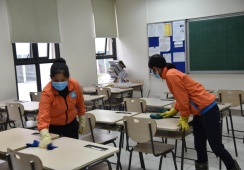