The Hanoitimes - "We all have a responsibility to continue building the ties of trust and friendship that ground our relationship, from security cooperation and health to business and people-to-people ties," says US Ambassador to Vietnam Daniel Kritenbrink.

On the occasion of the 25th anniversary of the US-Vietnam diplomatic relations, US Ambassador to Vietnam Daniel J. Kritenbrink talks to Hanoitimes on this relationship with steps which, he says, are extraordinary. The relations of the two former adversaries have thrived across the board.

Could you provide an overall assessment of the progress of the US-Vietnam relationship over the last quarter century? Which factors have driven the relationship forward?

In 1995, when President Bill Clinton announced the normalization of US diplomatic relations with Vietnam, our two countries had nearly no trade and very limited people-to-people connections.  Today, in areas as diverse as trade, development, education, health care, energy, and security, the United States and a strong, prosperous, and independent Vietnam are working together with a shared commitment to peace and prosperity. We truly are trusted partners, with a friendship grounded in mutual respect.

Looking at all we have achieved together, the progress of the US-Vietnam bilateral relationship over the past 25 years has been nothing less than extraordinary.

Our predecessors set aside their differences, acknowledged our history, and vowed to move forward as friends instead of foes.

Veterans and families on both sides were among the first to face the past and start building the bridges that allowed our governments to successfully engage. Americans and Vietnamese began working together to address humanitarian issues and the legacies of war years before the normalization of relations.

Since 1988, American and Vietnamese teams have partnered to recover our fallen soldiers, and in 1991, the United States Office for Prisoners of War/Missing in Action Affairs opened in Hanoi. Under President George H.W. Bush, the US Agency for International Development (USAID) began providing assistance to persons with disabilities in Vietnam using the Leahy War Victims Fund. Starting in 1993, the United States and Vietnam began working together to help rid Vietnam of the scourge of unexploded ordnance (UXO).

We also took early steps to build people-to-people ties, opening the Fulbright program in 1992, followed by the establishment of the Fulbright Economics Teaching Program (FETP) in 1994.  These programs trained thousands of policy makers, educators, and business leaders.

Two examples, among many: Prime Minister Nguyễn Xuân Phúc is an FETP alumnus, and Deputy Prime Minister and Foreign Minister Phạm Bình Minh received a Fulbright scholarship to study in the United States.

These first steps our two nations took together set the stage for the formal establishment of diplomatic relations and the opening of our two embassies in Washington and Hanoi in 1995. Then, in 1997, the US Senate confirmed Douglas “Pete” Peterson as the first US Ambassador to the Socialist Republic of Vietnam.

Ambassador Peterson, who served as a US Air Force pilot during the war in Vietnam and spent over six years as a prisoner of war, devoted his tenure to reconciliation and building a lasting relationship between Vietnam and the United States. He said, “I want to heal the wounds between the United States and Vietnam. It’s a tragic history that we’ve shared as two peoples.  No one can change that, but there is a great deal we can all do about the future. And that’s why I’m in Vietnam.”

Ambassador Peterson was not alone in believing he could do a “great deal about the future” of US-Vietnam relations. Important figures in our two governments, including the late Senator John McCain, Senator Patrick Leahy, former Secretary of State John Kerry, Ambassador Lê Văn Bàng, late Vietnamese Foreign Minister Nguyễn Cơ Thạch, and Former Vietnamese Foreign Minister Nguyễn Mạnh Cầm, and many others, promoted a shared future of trust, peace, and prosperity.

From two war foes, the two countries have witnessed tremendous advances in the defense-securities ties at many levels. Which is the prospect of these cooperative relations, Ambassador?

As Secretary of State Mike Pompeo said, “In the past, we were opponents on the battlefield.  But today, our security relationship is all about cooperation.” That cooperation happens at every level, from high-level visits by the Secretary of Defense, to the men and women serving in our militaries.

As an example, over the last three years, the US Coast Guard delivered 24 patrol boats and a 3,000-ton, 115-meter cutter to the Vietnamese Coast Guard, with US Coast Guard personnel joining the Vietnamese crew for the sail home. During his November 2019 visit to Hanoi, Defense Secretary Mark Esper agreed to expand this program by transferring a second Coast Guard cutter in 2020.

And we are excited to announce that this summer Vietnam will send its first-ever cadet to attend the United States Air Force Academy. Our cooperation continues to grow in other important areas, including peacekeeping, demining, humanitarian assistance and disaster response, law enforcement, and criminal justice system reform.

Our two countries have been striving to address war legacies in recent years to ease the pain of the past. Could you highlight some achievements?

Although our partnership with Vietnam remains focused squarely on the future, we continue to work actively on humanitarian and legacy-of-war issues. We do so out of a recognition that these issues were not only the “bridge” that brought our two countries back together in 1995, but today remain a fundamental element of our relationship going forward.

Since 1988, 727 missing US personnel from the war have been accounted for thanks to the work of American and Vietnamese teams partnering to recover our fallen soldiers. And now, we are actively working to assist Vietnam account for its own missing in action from the war.

During my time as US Ambassador to Vietnam, I have had the great honor of visiting both Trường Sơn Cemetery and Biên Hoà Cemetery to pay my respects to all Vietnamese soldiers killed during the war. These were extremely moving experiences for me personally, carried out in a spirit of reconciliation and mutual respect.

Our partnership with the government of Vietnam on this front has been so successful that in the past two years there have been no UXO-related injuries in the US government-supported province of Quang Tri.  In 2018, USAID successfully completed a US$110 million dioxin remediation project at Danang Airport, and last year we began, together with our Vietnamese partners, a massive dioxin remediation at Bien Hoa Airbase, the final major dioxin hotspot in Vietnam.

On July 8, I witnessed the signing of a Memorandum of Intent between USAID and the Vietnam Office for Seeking Missing Persons (VNOSMP) on the support of DNA analysis of unidentified human remains recovered from the US-Vietnam war. Under this agreement, USAID will provide Vietnam with the best, cutting edge technology for DNA extraction and analysis, work with Vietnam to increase the effectiveness and efficiency of their laboratories, and ultimately increase the number of remains that can be accurately reunited with their families.

Economic cooperation has been a highlight in our relations. Could you elaborate on the perspectives of this aspect?

Every day, American and Vietnamese business leaders develop strong trade ties enabling our commercial partnership to prosper. We have gone from almost no trade 26 years ago to over $77 billion in two-way trade today. Major US firms have invested billions both in Vietnam’s manufacturing sector and in its infrastructure, and we expect US investment in energy and other infrastructure to continue and even accelerate under our Indo-Pacific Economic Vision.

We are committed not just to economic growth, but to sustainable development. To accomplish this, we partner with Vietnam to protect and preserve its natural resources – working together, we are investing in sustainable forestry management; combating illegal, unreported, and unregulated fishing and illegal wildlife trafficking; and improving air and water quality.

Educational exchange is one of the key factors of people-to-people exchange, which is one of the priorities that you set for your term when you began your mission in 2017. Which have been impressive outcomes of this cooperation, Ambassador?

Investing in our future partnership means providing opportunities for our youth to start building lasting ties of friendship. The Vietnam Education Foundation, established in 2000, provided nearly 600 fellowships for Vietnamese students to receive master’s degrees and PhDs in science, technology, engineering, and mathematics. VEF alumni are now serving as professors in universities across Vietnam, training the next generation of Vietnamese scientists and engineers.

Every year, tens of thousands of young Vietnamese citizens study at universities in the United States. They contribute to academic excellence on our campuses, and they return to Vietnam with world-class educations, ready to contribute to the growing economy. In addition to helping Vietnamese students pursue their education in the United States, we are also assisting Vietnam’s efforts to modernize its higher education system.

The two countries have gone quarter century with many milestones. What future holds for our relations and which are the driving forces, Ambassador?

Looking back at how much the United States and Vietnam have achieved together over the past 25 years, and even before 1995, it is clear that our two nations have much to celebrate this year.  Yet, I think it is important to recognize that our work is not over. There are, naturally, areas where we would like Vietnam to do more, and where our two sides have differences. As friends, we address these issues openly and frankly with Vietnam’s leaders, listen carefully to their responses, and work together on common solutions.

When I hear people say that all we have achieved in the US-Vietnam relationship is a miracle, I reflect on what Ambassador Peterson once told me: Our shared progress is indeed remarkable, but it was not an accident.

Everything we have achieved has been built on the courage, goodwill, and painstaking work of those who came before. The strong Comprehensive Partnership that we share today is the result of countless actions and decades of sincere dedication by individuals from both of our great countries.

We all have a responsibility to continue building the ties of trust and friendship that ground our relationship, from security cooperation and health to business and people-to-people ties. I look forward to continuing to advance our bilateral relationship in 2020, and over the next 25 years of our partnership.

Thank you very much, Ambassador! 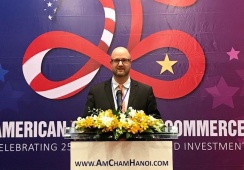