The Hanoitimes - Natural disasters occurred in central Vietnam in October, which were mainly storms, heavy rains, landslides and tornadoes, have caused severe consequences.

Throughout October, severe flooding and landslides have killed 230 people in central Vietnam while forces are making all effort to find the missing, Kinh te & Do thi quoted Prime Minister Nguyen Xuan Phuc as saying at the government’s monthly meeting on October 30.

"We sympathize with the losses of residents in the central provinces, of the relatives of soldiers and the police officers who have died," PM Phuc said and requested relevant ministries and agencies to provide timely support to the region to overcome the consequences of natural disasters.

Reporting at the meeting, Minister of Agriculture and Rural Development Nguyen Xuan Cuong said that October was a month of terrible natural disasters in central Vietnam. In just one month, the central provinces had to deal with five storms, two tropical depressions, floods, and landslides.

Regarding storm Molave ​​which made landfall in the central region on October 28, Mr. Cuong noted that this was one of the two strongest typhoons in the past 20 years and causes severe consequences.

The minister added that Molave blew away 92,000 houses’ roofs, including 88,000 in Quang Nam province; brought down 5,000 houses and damaged more than 600 schools and hospitals.

According to the General Statistics Office, natural disasters occurred in October, mainly storms, heavy rains, landslides and tornadoes, destroyed 111.9 thousand houses, killed three thousand cattle and 600.5 thousand poultry, and shattered 45 thousand hectares of rice and 22.3 thousand hectares of other crops. The total value of property damage caused by the natural disasters in the month was VND2.7 trillion (US$116.2 million).

Provinces of Quang Tri, Thua Thien - Hue and Quang Binh have suffered heavy losses with at least 106 deaths and missing, 133 injured; 95.3 thousand houses were collapsed, swept away, flooded and damaged; 2.4 thousand cattle and 573.2 thousand poultry killed. The total damage in these provinces was estimated at VND1.4 trillion (US$60.3 million).

Besides at least 230 people killed in the first 10 months of 2020, natural disasters injured other 516, left 1,940 houses collapsed, other 212.7 thousand damaged, destroyed 187.8 thousand hectares of rice and nearly 90 thousand hectares of other crops. The total property damage was estimated at over VND10.1 trillion (US$434.7 million).

Since October 6, the central region of Vietnam has suffered from torrential downpours that triggered severe flooding. Storm Linfa, which hit on October 11, and Storm Nangka, a day later, worsened conditions and caused landslides in different parts of the region.

The National Center for Hydro-Meteorological Forecasting said heavy downpours are likely to continue and another tropical storm may threaten the region next week. 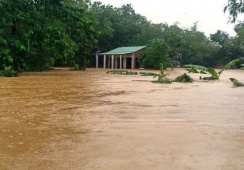 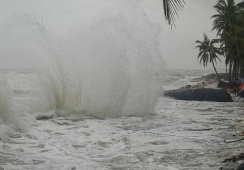 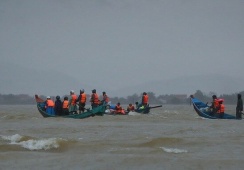