Today’s Doodle artwork features an idyllic rowboating scene full of traditional Vietnamese symbolism. The man paddling is depicted wearing an iconic Nón lá, a conical leaf hat that originated thousands of years ago and has since become synonymous with the nation’s culture.

Opposite of the man steering the boat, a woman is dressed in the elegant national costume of Vietnam - the Áo Dài, which embodies the pride of the Vietnamese people, Google Doodle writes.

The two are encircled by lily pads and lotus flowers, typical flora found throughout Vietnam’s lakes and ponds. The national flower of Vietnam, the lotus submerges under muddy water at night and resurfaces the next morning. Upon reaching the new dawn’s sunlight, it blooms untarnished by the surrounding mud – even during the most turbulent of times. This act of perseverance demonstrates why many in the country view the lotus blossom as a symbol of strength and optimism.

Not only does this colorful flower brighten the Vietnamese landscape, but it is also deeply ingrained in the nation’s cultural identity, from its towering architecture to its unique cuisine. The lotus’ distinctive shape has found its way into the design of multiple Vietnamese pagodas, temples, and communal houses since the Ly and Tran dynasties, like the prominent One Pillar Pagoda in Hanoi. In addition to its enduring symbolic value, the flower is used to make lotus tea, an essential part of many Vietnamese celebrations.

Many Vietnamese young people expressed their surprise and pride when seeing the iconic images on Google Doodle. 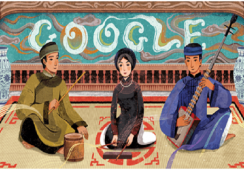