The Hanoitimes - The Government e-portal has successfully disseminated activities of the Vietnamese government on global cyberspace over the past 15 years.

Government e-portal deserves to be a mainstream media outlet, Editor-in-Chief of the Government e-portal Nguyen Hong Sam said at the ceremony to mark the 15th anniversary of the launch of the portal on January 6 (January 10, 2006 - 2021).

Addressing the ceremony, Mr. Nguyen Hong Sam noted that the Government e-portal has successfully disseminated activities of the Vietnamese government on global cyberspace over the past 15 years.

The Party's guidelines, the State's laws and the Prime Minister’s direction on socio-economic development, national defense and foreign affairs have been timely delivered on the Portal.

The portal has bridged the government, people and businesses and is an effective communication channel between the Prime Minister and leaders of ministries and branches.

The Government's fan page has nearly 1.4 million regular followers. In the fight against the Covid-19 pandemic, the fan page has reached almost all Facebook users in Vietnam (about 60 million people) and provided them with useful information on Covid-19 prevention. It has become an essential social media channel in the prevention and control of Covid-19.

Furthermore, Nguyen Hong Sam said that there remain limitations in the operation of the portal that need to be addressed to fulfill political tasks in the future.

Mr. Sam asserted that the portal would meticulously apply the latest information technology and would actively participate in the digital transformation, the construction of the digital society, the digital economy, the digital government, among others. 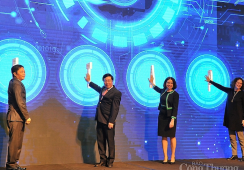