Greatness of culture can be found in festivals

Nothing seems to be more enchanting than wishing someone in their own tongue.

Tet is upon Vietnam where festive atmosphere is in the air. The Hanoi Times has the honor to introduce the experiences of Varnica Sharan, Amrita Sarraf Sharan and Vishwa Sharan living in Hanoi, the place they have been for nearly three years.

“Chuc mung nam moi” (Happy New Year) was like a magical spell that captivated the hearts of the local Vietnamese when we wished them. Nothing seems to be more enchanting than wishing someone in their own tongue.

Festive is in the air

As they say, the greatness of a culture can be found in its festivals. Last week when I stepped into the office, it was fully draped with exquisite painting and ornate hangings. The trees or branches of peach blossom and kumquat can be seen outside almost all houses and buildings. It was a treat to our eye to see homes adorned with red hangings encrypting Chinese and Vietnamese couplets in golden color. While days are prettified with, pink peach blossoms or dangling kumquat in the street, nights are illuminated with gorgeous lanterns. One can see Vietnamese women selling colorful flowers and people can be seen dressed in their traditional attire. The street is flooded with décor; Hanoi does not look like the same city that was a week back. Life in Hanoi appears like a colorful canvas, especially when one visits the Hoan Kiem area.

Last year, I happened to be in the vicinity of Hoan Kiem lake. Over the weekend, the traffic on roads were diverted and opened just for pedestrians. The life seemed so vibrant with youths elegantly performing live and kids occupying their own cozy area for playing. I was mesmerized by the dragon dance and lion dance which are forms of folk storytelling and are typical of Tet festival. Folk tales have passed down the lanes of history through such performances.

We are different yet so similar

Living here, I realized how different we are yet how similar we are. The festival's predominant color is red, which is regarded as an auspicious hue for the Lunar New Year, symbolizing prosperity and good luck. Even in India, red is often revered as an auspicious color.

The Tet festival traditionally marks the end of the harvest season. Interestingly, back in India during the same time, we also celebrate harvest festivals with different names e.g. Makar Sankranti, Magh Bihu, Pongal, Lohri and Uttarayan, etc across India. These festivals commemorate the Hindu New Year for various parts of India around 13th and 14th of January. In India on this day we generally offer, puffed rice/ sesame seeds with jaggery moulded as ball, (we call it “laai”/ “laddu” while in Vietnam it is called “banh bong gao”) to our deities and later eat the same. To my pleasant surprise, I was able to find this in the local Hanoi market. Never did I imagine that my festival food local to India would be available in Vietnam. Are we really different?

Nothing brings people together than good food

One can feel the fragrant aroma of the beautifully crafted banh trung thu or mooncakes that wafts around the street. We purchased one such mooncake that melted in our mouth leaving back long lasting blissful taste. On a lighter note, one should never hurry to buy a mooncake as you are always gifted with one. It is a tradition for the Vietnamese to prepare mooncakes and gift them to loved ones.

Wide range of culinary with a specialty of green sticky rice stuffed with meat seems popular. Tet is a time to honor ancestors and visit family members and a time to feast.

Tranquility that I love

For most expats, Tet means returning to their home countries or exploring the stunning landscape of Vietnam. However, this year we opted to spend considerable days in Hanoi to get a sense of the country's rich cultural antiquity.

With numerous brands giving substantial discounts before Tet, people can be seen on shopping spree like there will be no tomorrow. Soon when Tet begins, people will start going back to their provinces to meet their families. The streets will be deserted with few automobiles on the roads. What remains is complete tranquility that brings out the best in Hanoi. 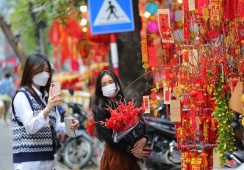 [Infographic]How to celebrate Tet holiday safely in the pandemic 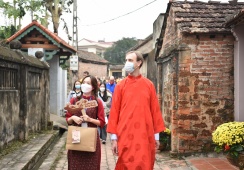 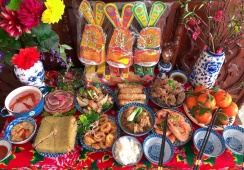