The Hanoitimes - Inventories of retail firms are capable of ensuring supply for Hanoi’s market in 60 – 90 days with estimated costs of VND174 trillion (US$7.48 billion).

A quick survey on markets and grocery stores in Hanoi on March 31 showed the number of customers going to buy food and basic necessities nearly tripled compared to previous days.

In wet markets, prices of some goods rose by 10 – 15% from a day earlier due to people buying food in large quantities, while in super markets and major stores, prices remained stable.

A representative of MM Mega Market said during this period, this super market chain has increased its inventories of basic necessities, such as rice, meat, vegetables, dried foodstuffs and seafood by 40% compared to previous days.

Vice Director of Hanoi’s Department of Industry and Trade Tran Thi Phuong Lan said Hanoi plans to increase the supply of consumer goods by 30 – 50% in April compared to previous months.

With such abundant goods, the department is committed to meeting growing shopping demand of local people, Lan said.

Inventories of retail firms are capable of ensuring supply for Hanoi’s market in 60 – 90 days with estimated costs of VND174 trillion (US$7.48 billion).

Tran Duy Dong, director of the Department of Domestic Market under the Ministry of Industry and Trade, told local media all 63 provinces/cities have prepared plans to deal with various scenarios of the pandemic.

Dong stated during the 15-day social distancing period, all super markets and transportation of goods remain operational as usual. 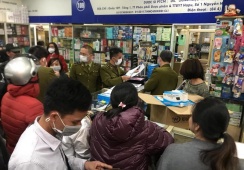 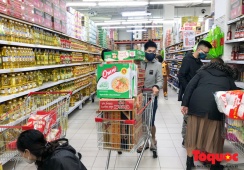