The Hanoitimes - On February 21, Hanoi People’s Committee launched the tree planting campaign called “Tree-planting festival: Forever grateful to Uncle Ho” on the occasion of Lunar New Year and in response to the government’s program of planting one billion green trees in the period of 2021-2025.

Member of the Politburo, Secretary of the Hanoi Party Committee Vuong Dinh Hue and Minister of Natural Resources and Environment Tran Hong Ha attended the ceremony.

Speaking at the launching ceremony, Hanoi People's Committee Chairman Chu Ngoc Anh affirmed: “Tree planting is held annually by Hanoi capital with the active participation of the entire political system including Hanoi authority and people from all walks of life. Thanks to that, over the past years, the city's movement of tree-planting and afforestation has attained remarkable achievements.”

Following the great accomplishments of tree-planting campaigns in previous years, right from the beginning of 2021, the city units had focused on successfully completing the decoration of streets with trees, flowers, ornamental plants to celebrate the 13th National Party Congress and Vietnamese Communist Party Founding anniversary; creating a premise for carrying out the campaign “Embellishment and Development of Urban green tree system in 2021”; and responding to the program of planting one billion trees- period 2021-2025 launched by the Prime Minister.

Chairman of the People's Committee of Hanoi Chu Ngoc Anh emphasized that “planting a tree is just the beginning; it is more important to take good care of it and let it grows well”. He added this is a responsibility of the whole society.

The Chairman of the City People's Committee proposed districts and towns to widely disseminate among people about the purpose and meaning of the tree-planting campaign, the important role of the greenery, its long-term benefits and the humanistic values of planting, caring and protecting trees; local authority in districts and town need to launch the tree-planting ceremonies at their places in accordance with the conditions to ensure practicality, efficiency and avoiding formality.

At the launching ceremony, Minister of Natural Resources and Environment Tran Hong Ha affirmed that the program of planting one billion trees in over five years is a meaningful program.

Tree-planting festival is a long-lasting tradition on the New Year occasion that helps boost the green coverage in the nation that is listed among the hardest-hit by climate change.

The campaign has been well responded by different localities nationwide. Hanoi alone, plans to grow roughly 500,000 trees together with developing 27,756 ha of forest and forest land.

With the aim of building the capital as a “Green- Civilized- Modern” city, Hanoi Party Committee and authority determine that tree-planting and tending urban greenery system is one of the important tasks in the city's annual socio-economic development plans.

Previously, the capital city has fulfilled its goal of planting one million trees two years ahead schedule. People have also planted 600,000 more urban trees on more than 250 roads, aiming to create beautiful landscapes as well as help prevent wind, dust and noise for the city.

Speaking at the ceremony, Prime Minister Nguyen Xuan Phuc emphasized: "This is a very meaningful program, as Uncle Ho once pointed out that “tree-planting is a less expensive but highly beneficial work”. And completing the “One billion green tree- planting program” means to well realizing the wish of President Ho Chi Minh”.

"Green is also synonymous with prosperity, is the color of fertility and sustainable development," said the Prime Minister. Therefore, the Prime Minister proposed to officially select the message of “For a green Vietnam” as the motto of “One billion green tree-planting program”. “The Government and I hope that Phu Yen province will be one of the most active localities in implementing this project," Nguyen Xuan Phuc emphasized. 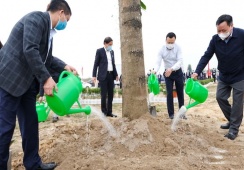 Hanoi responds to program of planting one billion trees