Hanoi pushes for cooperation with peers to boost domestic consumption

The Hanoitimes - Hanoi has played a key role in forming supply and production chains among local enterprises from various provinces and cities, said a senior government official.

With domestic consumption seen as a key measure to boost economic recovery during the post-Covid-19 period, Hanoi has been stepping up its cooperation with other provinces and cities to boost trade and strengthen supply–demand connections.

For a city of 10 million people, Hanoi has huge demand for agricultural products. A study from the Hanoi Promotion Agency (HPA) revealed the city’s consumption demand in the upcoming Lunar New Year period in 2021 could increase by 3 – 20%, while local suppliers could only meet 30 – 60% of the market needs.

To address this issue, the HPA and Hanoi’s Department of Industry and Trade have cooperated with the provinces of Son La, Bac Kan, Quang Ninh, Hai Duong, and Dong Thap, among others, to organize 10 fruit and agricultural product weeks, as well as four promotional events for products under the One Commune One Product (OCOP) program.

Throughout these events, enterprises from Gia Lai, Binh Thuan, Long An, Lao Cai, and Quang Ninh provinces have brought over 10,000 tons of agricultural and seafood products into Hanoi’s distribution network.

Vice Director of HPA Nguyen Thi Mai Anh said with supply – demand connection events, Hanoi has supported over 200 firms from other provinces and cities to sell their goods and products to major retail networks in Hanoi, including Vinmart, Big C Thang Long, Saigon Co.op Hanoi, or BRG, among others.

Vice Minister of Industry and Trade Cao Quoc Hung said Hanoi has played a key role in forming supply and production chains among local enterprises from various localities, in turn contributing to the dual target of both containing the pandemic and boosting economic recovery.

Nevertheless, as the majority of Vietnamese enterprises are of small and medium scale, they are lacking the consistency in terms of product quality and quantity that are required by modern retailers.

Vice General Director of Central Retail Nguyen Thi Phuong said the group is willing to help bring in products and goods from other regions into its distribution network or for export. However, local firms have to ensure their strict requirements and standards.

Hanoi would request the Ministry of Agricultural and Rural Development to support provinces and cities in the planning process for efficient production and avoid the market saturation of certain types of products.

Mr. Suu also sought for support from the Ministry of Industry and Trade in developing trade infrastructure in Hanoi and the establishment of more showrooms for products under the OCOP program. 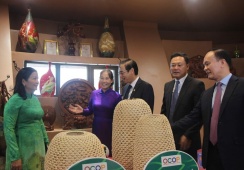 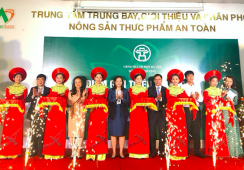 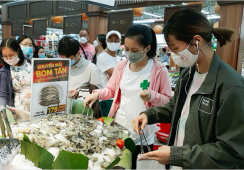 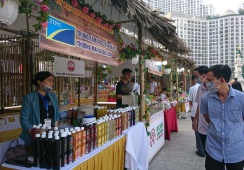