The Hanoitimes - Hanoi identified the satisfaction of enterprises and citizens as the gauge of the city’s governance, said Chairman of the Hanoi People’s Committee Nguyen Duc Chung.

Hanoi has remained steadfast on achieving the target of building e-government and making the satisfaction of enterprises and citizens as the gauge of the city’s governance, according to Chairman of the Hanoi’s People Committee Nguyen Duc Chung.

In 2019, Hanoi has finalized the pilot proposal of the urban administration model, which was approved by the Politburo and the National Assembly, said Chung at a conference on December 27.

The proposal increases the authority and responsibility of the city, including decentralization and delegation of authorities from the city-level governance to the district, commune and village levels, Chung said.

Chung said the city also focused on reforming administrative procedures to reduce time and costs for enterprises and citizens.

Chung referred to the tax administration, in which the rate of online tax declaration has reached 98%, online tax payment 95%, and 100% enterprises register businesses online and 98.81% administrative documents are processed on time.

Thanks to broad application of information technology in processing administrative procedures, over 1,448 online public services in Hanoi, or 81% of the total, are available at advanced stages of 3 and 4 out of a 4-level scale so far.

Hanoi has been integrating its online public services to the national portal under the instruction of the government, targeting provisions of public services anytime, anywhere.

Along with administrative reform, the city also focuses on streamlining the management structure, in turn saving costs and enhancing efficiency, and at the same time gives priority to improving the qualifications of public servants, particularly the work ethics and the service quality.

The Satisfaction Index of Public Administration Services (SIPAS) in 2018 was 83%, resulting in an increase of 16 ranks against 2017 and completing the targets set in Program No.08 of the municipal Party Committee on administrative reform in 2016 – 2020 two years in advance.

Hanoi remains the second of 63 provinces/cities in the public administration index (PAR) for two consecutive years 2018 – 2019; 9th nationwide in the provincial competitiveness index (CPI) in 2018, rising 15 positions against 2015; and ranked second nationally in index of IT application readiness, among others. 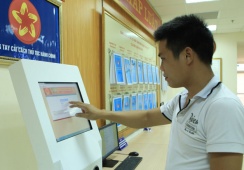 Hanoi strives to have 100% modernized rural districts by 2025