The Hanoitimes - Developments along the Red river will play an important role in driving Hanoi's future.

Hanoi needs to remove obstacles to soon implement the zoning plan of the riparian areas on both sides of the Red river that runs through the city, Secretary of the municipal Party Committee Vuong Dinh Hue has said.

At a working session with the Ministry of Agriculture and Rural Development on July 8, Hue said that Hanoi needs to complete the zoning plans, including the plan on both sides of the Red river and making full use of the land resources in the riparian areas along the river banks.

In order to carry out the plan on both sides of the Red river and other rivers, it is required to make a flood drainage plan. Therefore, the municipal Party chief suggested that the Ministry of Agriculture and Rural Development should work out and submit to the Vietnamese government for approval a flood drainage plan for the riparian areas.

As the zoning plan has not been devised, land resources in Hanoi have not been made full use of. No one wants to make long-term investments in the riparian areas as winning bidders are only entitled to the land usufruct for five years.

"The riparian areas in Dan Phuong and Hoai Duc districts are immense but left fallow. There is a large riparian area in Hoan Kiem district which has been left unused because of the lack of a zoning plan," Hue said.

Therefore, the Hanoi city government wants to work with the Ministry of Agriculture and Rural Development in setting plans to create the basis for planning on both sides of the Red river, the municipal Party chief stressed.

For his part, Chairman of the Hanoi People's Committee Nguyen Duc Chung said that in 2018, the municipal government coordinated with the Irrigation Planning Institute to draw up a flood diverting plan. Both sides agreed on a plan to build a levee and a levee crown road.

"I suggest that we build two levee crown roads along both banks of the river from Thang Long bridge to Vinh Tuy bridge. In the narrow and high areas such as the section through Hanoi port, we would build a viaduct along the embankment like the South Koreans did with the Han river section running through Seoul," Chung said.

Under the futuristic zoning plan, the riparian areas will become ecological urban areas. About 900,000 local residents along both sides of the river will be able to make a living when the plan is carried out.

Minister of Agriculture and Rural Development Nguyen Xuan Cuong pledged that engineers from his ministry would work with Hanoi on revising the zoning plan.

With the expectation that the dream of a city in the riparian areas of Red River will soon come true, at a meeting on July 6-7 of the Hanoi People’s Council, delegate Nguyen Minh Duc from Thanh Xuan district asked the municipal government to pay attention to investing resources in this plan. 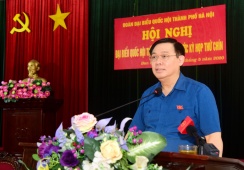