The Hanoitimes - Hanoi is an essential part in Vietnam – Japan relations, partly due to a growing number of Japanese nationals and enterprises in the city, said the Japanese ambassador to Vietnam.

Hanoi stands ready for a new wave of capital inflows, especially from Japan, as countries around the world are diversifying supply and value chains, according to Secretary of the Hanoi Party Committee Vuong Dinh Hue.

Hanoi would continue to address issues related to foreign-invested projects, including those of Japanese investors,  Hue said at a meeting with newly-appointed Japanese Ambassador to Vietnam Yamada Takio on May 26.

The municipal Party chief suggested the strong comprehensive partnership between Vietnam and Japan is laying a solid foundation for localities from the two countries to strengthen cooperation in various fields.

While trade and tourism are major pillars in cooperation between Hanoi and Japan, Hue suggested the latter to continue providing ODA for the capital city’s major infrastructure projects.

According to Hue, Hanoi has effectively contained the Covid-19 pandemic, and targets an economic expansion rate at 1.3 times higher than the national average.

For his part, Japanese Ambassador to Vietnam Takio said Hanoi is an essential part in the Vietnam-Japan relations, not only because of the its status as the capital city, but also the growing number of Japanese citizens and enterprises in the city.

Takio said the Japanese government is seeking to boost economic cooperation with Vietnam in a new normalcy so that Japanese firms in Vietnam could soon restart their businesses.

The ambassador asked for the city’s support for over 1,000 Japanese experts and citizens to return to Hanoi for work, with which Hue fully agreed because those entering Vietnam fully comply with Vietnamese regulations on Covid-19 prevention. 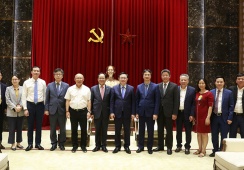