The parade of Formula 1 model car along some Hanoi’s main streets on February 22 heated up the city ahead of the upcoming Vietnam Grand Prix 2020.

The parade was led by high cylinder motorbikes and a Ferrari and ended with a truck carrying the F1 model car, running through some iconic sites of Hanoi including the Hanoi Opera House, Thang Long Boulevard, the August Revolution Square, among others.

The F1 model car was made of composite material by 3D printing with its design and color resembling the real car. It took six months to make the model. Before casting, the model is 3D carved with foam.

The F1 car model was painted with the Hanoi F1 circuit which features 22 turns over its 5.565km length, inspired by the sections of the race circuits in Monaco, Germany, and Japan.

The body of the F1 car model also features some cultural symbols of Vietnam including the Temple of Literature and the bronze drum. 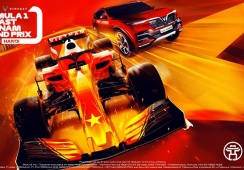