The Hanoitimes - Although GRDP growth came at a record low of 3.72% in the first quarter, such growth remains the highest among cities globally with similar size and under impacts of Covid-19.

Hanoi would strive to minimize negative impacts caused by the Covid-19 pandemic and sets sight on an economic growth rate at 1.3 percentage points higher than the national average, according to Secretary of the city Party Committee Vuong Dinh Hue.

Although its GRDP growth came at a record low of 3.72% in the first quarter (Q1), such growth remains the highest among cities globally with similar size and under impacts of Covid-19, said Hue at a national online conference on April 10.

In a positive note, Hanoi’s tax revenue during the period climbed 9% year-on-year to VND72.6 trillion (US$3.11 billion), equivalent to 26% of the year’s estimate, Hue added.

As part of measures to aid economic growth, Hue said the city targets 4.04% growth rate in the agricultural sector, with a focus on repopulating the pig herd from the current 1.1 million to 1.8 million.

Hue said the city has allocated VND650 billion (US$27.9 million) in trust fund to the Vietnam Bank of Social Policies so that the bank could provide preferential loans to rural workers for agricultural development.

Meanwhile, Hanoi is stepping up efforts to promote stronger growth in fields such as pharmacy, medical equipment, Industry 4.0, among others.

Over the last five years, total public investment fund in Hanoi reached VND107.3 trillion (US$4.6 billion), accounting for 10% of the nation’s figure. To date, Hanoi has disbursed 86% of the target amount at VND80 trillion (US$3.43 billion) while the remaining amount is set to be fully disbursed by the year-end.

While the pandemic could cause a loss of VND10 – 12 trillion (US$429 – 515 million) to the city's budget revenue, the disbursement target would stay unchanged, Hue said.

“In case Hanoi could disburse VND40 trillion (US$1.71 billion) by the end of this year, this would help the city address social security issues and lay the foundation for a new wave of investment inflows from other economic sectors,” Hue said.

Based on preliminary data from the first two months of 2020, Hanoi’s authorities have drafted three growth scenarios. In the first scenario and also the most optimistic one, Hanoi could still achieve target growth rate of 7.5% if the pandemic is contained in Q1, with a strong rebound in Q2 and growth acceleration in Q3 and Q4.

However, in case the pandemic is put under control in Q1, but its negative impacts on the economy continue to linger, its GRDP is expected to expand 6.93% this year.

In the worst scenario where the Covid-19 pandemic persists until Q2 and affects the subsequent quarters, Hanoi’s GRDP is projected to grow 6.42%. 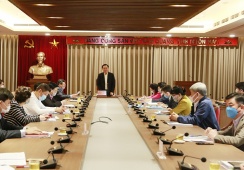 Hanoi plans to attract investment in IT and telecoms infrastructure development