The Hanoitimes - This is part of a plan to encourage Hanoi’s residents to switch to public transportation, thus easing traffic congestion and improving air quality.

In 2020, the Hanoi government will build another 500 bus stops, part of a plan to encourage Hanoi’s residents to switch to public transportation, the Government Portal quoted the Urban Transport Management Center under the Hanoi Department of Transport as saying.

Director of Urban Transport Management Center Nguyen Hoang Hai said that in 2019, the capital city’s bus infrastructure was enhanced with 470 new stops, an increase of 14% year-on-year, and six more terminals.

The bus network in Hanoi now has 3,790 stops, 361 bus shelters, five interchanges, 109 terminals and 12.9km of bus-only routes, which have improved the service quality of the network and ensured safety for vehicles and passengers.

In November 2019, the Hanoi People's Committee approved the construction of 600 new European standard shelters and billboards in 12 urban districts under the public-private partnership (PPP) format.

Currently, suburban bus routes account for 57% of Hanoi’s public transport, connecting the city’s peripheral areas with the downtown, according to the municipal Department of Transport.

There are 71 bus routes operating in outlying districts with more than 2,100 bus stops, only 23 of which are sheltered, accounting for less than 1%, the department said.

The average distance between two stops is 900 meters while the operating frequency of suburban buses is low, forcing passengers to wait long time for buses in these areas.

The Hanoi government has been working to expand the city's public transport network as personal vehicles are no longer convenient given the rampant congestion in the city, but progress has been slow. 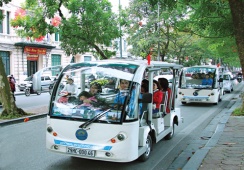