The Hanoitimes - Building the collection system underground help avoid alteration in the underground infrastructure and other urban works and utilities.

The Hanoi People's Committee on May 18 held a groundbreaking ceremony for an underground sewage collection system along the To Lich river which has been heavily polluted for decades, Kinhtedothi.vn reported.

The sewage collection system is 21 kilometers long, of which more than 11 km run underground in the riverbed, from Hoang Quoc Viet street in Cau Giay district to Quang bridge in Thanh Tri district.

The Hanoi Management Board of Investment, Construction Projects on Water supply, Drainage and Environment said that building the collection system underground helps avoid alteration in the underground infrastructure and other urban works and utilities.

"In order to avoid ground clearance and traffic obstruction, the package is designed on the basis of underground jacking technology, applied for the first time in Hanoi," said Nguyen Van Hung, director of the board.

He added that underground excavation at a depth of 6-19 meters will help reduce risks and ensure safety in construction.

A Japanese company has won the bidding to build the sewage collection system along the To Lich river. Japanese engineers will directly work in the project for 48 months.

The sewage water in the collector will then flow to Yen Xa wastewater treatment site where a centralized sewage treatment facility is under construction.

The Yen Xa waste water treatment project kicked off in 2016, with a factory capable of handling 270,000 cubic meters of waste water per day and a sewage collection system along the rivers of To Lich and Lu with a total length of over 52 kilometers. The project costs a total of more than VND16,000 trillion (US$693 million).

The Yen Xa wastewater treatment project includes four bidding packages. Bidding packages No.2 and 3 to build the sewage collection systems along the To Lich and Lu rivers also kicked start on May 18, 2020 while package 4 is expected to build a sewer system for a part of Ha Dong district and a new urban area.

The Hanoi Management Board of Investment, Construction Projects on Water supply, Drainage and Environment said that the progress is in accordance with the plan and the project is slated for completion in 2022.

Speaking at the groundbreaking ceremony, Shimizu Akira, head of the Representative Office of the Japan International Cooperation Agency (JICA) in Vietnam, requested the contractor to strictly implement safety measures during the process and strictly comply with JICA's instructions on environmental and social issues.

In early February, while making an inspection to the site, Chairman of the municipal People's Committee Nguyen Duc Chung asked contractors to speed up the construction of Yen Xa wastewater treatment site to help clean the once iconic To Lich river and better lives of citizens along the river.

Chung stressed this is a key and vital project of Hanoi as it would collect and purify sewage discharged by people in seven districts, especially waste water from the dying To Lich river.

The municipal mayor also reminded that the project management must coordinate the contractors smoothly to avoid delaying the project’s progress.

"Contractors need to carefully study Vietnam’s climate to accelerate the project which must not be delayed,” Chung said. 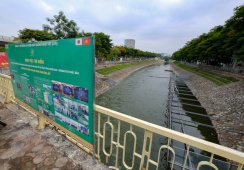