The Hanoitimes - The city, however, strives to hit the 7.5% growth target.

As the fight against the Covid-19 pandemic intensifies, Hanoi is forced to revise its economic growth target, according to Secretary of the Hanoi Party Committee Vuong Dinh Hue.

The city, however, remains steadfast on striving to reach the 7.5% growth target in the first scenario, while trying to stay attain the growth rate of 6.42% in the second one, Hue said in a meeting on April 3.

To achieve such goals, Hue requested the city's authorities to develope the agriculture sector, with a focus on repopulating the pig herd and increasing pork supply. The sector should target a growth rate of at least 4.04% for this year, said Hue.

The city's Party chief expected higher growth in domestic trade, especially online payment services and fields that are having advantage for growth at present such as face mask and medical equipment production, among others.

While the city is giving priority to combating the pandemic, relevant agencies should take time to revise public and private investment procedures so that when the pandemic is contained, Hanoi could immediately jump-start investment activities and disbursement process, Hue said.

Hue asked the local government to continue strong support for the business community hurt by the Covid-19 pandemic, while allocating 5% of regular spending of administrative agencies in the remaining months of 2020 for anti-virus measures.

Director of Hanoi’s Department of Planning and Investment Nguyen Manh Quyen said Hanoi has been strictly complying with instructions of the government in both containing the Covid-19 pandemic and realizing socio-economic development objectives.

However, under growing impacts of the Covid-19 pandemic, the city’s gross regional domestic product (GRDP) growth is estimated at a three-year low of 3.72% in the first quarter, significantly lower than an expansion of 6.99% recorded in the same period last year and the nation’s economic growth of 3.82%.

According to Quyen, Hanoi’s export turnover during the three-month period declined 18.1% year-on-year to US$2.74 billion, while imports went down 21.3% to US$5.83 billion.

In spite of difficulties, all most all economic sectors recorded positive growth rate in the January – March period, except for the agriculture sector that suffered a decline of 1.17% compared to an increase of 3.19% in the first quarter last year. 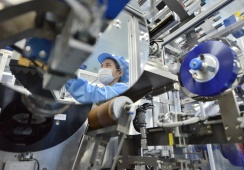 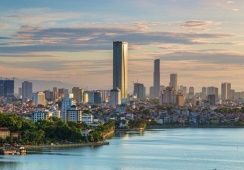 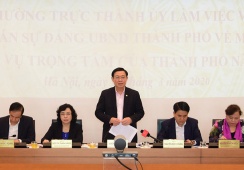 Hanoi’s 2020 economic growth projected to slow to 6.42% in worst scenario