The Hanoitimes - When the waste-to-energy plant is in service, it is expected to reduce waste pollution that affects the lives of locals.

According to many experts, to solve the garbage issue in Hanoi and avoid the recurrence of dumpsite blockade, the city needs to soon complete construction of the waste-to-energy plant on its outskirts, Kinh te & Do thi reported.

The waste-to-energy plant will contribute greatly to the city’s garbage treatment. The application of the technology can reduce the volume of waste buried in landfills which have become unsustainable due to the leakage of hazardous elements and leachate.

Besides, incineration should not be contemplated as a waste solution as it requires substantial use of fossil energy such as fuel and coal, and emits significant amount of pollutants when unsorted mass waste is burned.

Mass incineration limits the possibilities of beneficially reusing and recycling waste. Over the long term, it is not a sustainable solution or environmentally and economically practical, the experts explained.

Dr. Hoang Duong Tung, former deputy director of the Vietnam Environment Administration under the Ministry of Natural Resources and Environment, said that garbage burying is an outdated method.

In many countries, waste is no longer waste but has become a valuable resource for life. Some countries even import garbage to serve their production activities because the local amount of waste cannot meet the demand, Dr. Tung added.

Especially, the waste-to-energy plant project in Soc Son district, the largest one in Vietnam, will have a processing capacity of 4,000 tons of waste per day to help treat litter collected from urban districts.

Thien Y Environment Energy Joint Stock Company, the project's contractor, is speeding up the works to put the project into operation in February 2021. Once in service, the plant is expected to reduce waste pollution that affects the lives of locals to below 5% instead from about 80% at present.

However, while waiting for the project to come into operation, the most important measure is to minimize the impacts from the process of collecting, transporting and treating waste for landfill.

An official of Soc Son district administration said that authorities need to strictly sanction garbage trucks which drop garbage on the road during transportation. Besides, they must strictly enforce regulations in the process of receiving and treating garbage to limit the impact on local residents’ lives.

"If the above-mentioned shortcomings are not solved in time, it will cause people’s resentment," the official said.

Hanoi currently discharges around 6,000 tons of solid domestic waste daily, 89% of which is buried.

Five days ago, another garbage crisis occurred in Hanoi when residents of Soc Son district impeded the entry of garbage trucks to the Soc Son Waste Treatment Complex, leaving downtown areas loaded with garbage. They blamed the authorities for the slow compensation and resettlement, leaving them exposed to diseases due to heavy pollution.

This was the second time in 2020 and the fifteenth since the dump was put into operation that people have prevented garbage trucks from entering the landfill, resulting in thousands of tons of garbage piling up along streets in the capital city.

The Soc Son Waste Treatment Complex is the largest in Hanoi, spanning over 157 ha, and was built in 1999. The complex handles around 5,000 of the 6,500 tons the city generates each day. 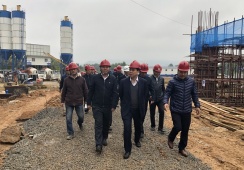