The China-financed urban railway took 10 years of construction and exceeded 205% of the initial investment.

The Ministry of Transport will hand over the China-funded Cat Linh-Ha Dong urban railway project, the first of its kind in Hanoi, to the municipal government on November 6 for commercial operations.

Local authorities will decide the operating timetable but passengers will benefit free rides in the first 15 days of operations, Director of the Hanoi Department of Transport Vu Van Vien said.

“Hanoi has been fully prepared for the operations which will be in discussions between the local authorities in the Ministry of Transport. In the initial operations, four to six trains will be used” Vien told The Hanoi Times.

He added that the quality assessment results of the metro line were approved by the State Council for Acceptance of Construction Projects on October 29. It is the final step for the project to begin commercial operations.

Vu Hong Truong, director of Hanoi Railway Company Limited, the unit that directly operates the service, said that the station staff will count the number of passengers.

Notably, the ticketing area is marked for people to keep a safe distance while lining up. Passengers entering and exiting stations must scan a QR code. Each station has an isolation room for any person suspected of being infected with Covid-19, Truong added.

The fares are expected to start at VND8,000 (35 US cents) for the shortest distance, while the maximum cost for a trip covering the entire line between Yen Nghia Station and Cat Linh Station, will be VND15,000.

Commuters can enjoy unlimited rides in a single day if they purchase a Day Pass which costs VND30,000 (US$1.31) while a monthly pass will cost VND200,000 (US$8.72), with a 50% reduction in price for students and workers at industrial parks.

He also required the strict enforcement of Covid-19 prevention and control measures, ensuring traffic safety, and transparent information of the project in the public.

The Cat Linh-Ha Dong urban railway is 13-kilometer long and has 12 stations and 13 trains. Each train, whose designed speed is 80 km per hour, has four carriages capable of carrying over 900 passengers.

It starts at the Cat Linh Station in Ba Dinh District and ends at the Yen Nghia Station in Ha Dong District. The metro line has total investment of approximately US$886 million. Works on the railway began in 2011 but the project left numerous setbacks and delays.

The trial run was completed in December 2020, with thousands of trips covering more than 70,000 km. 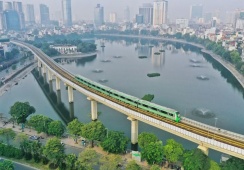