With this deal, the Japanese firm has become the third-largest shareholder at Petrolimex with a total share amount of 63 million, or a 4.87% stake.

Japan-based ENEOS Corporation, a subsidiary of Nippon Oil & Energy Vietnam, has completed the purchase of 25 million shares, or a 1.93% stake of Vietnam’s largest petroleum distributor Petrolimex, according to a filing to Ho Chi Minh Stock Exchange (HoSE).

The transaction period took place from May 24 – June 15 through the order matching on-exchange method.

With this deal, the Japanese firm has become the third-largest shareholder at Petrolimex with a total share amount of 63 million, or 4.87% stake, behind Vietnam’s Committee for State Capital Management (CSCM) with 981.68 million shares, or 75.87% stake, and Nippon Oil & Energy Vietnam with 103.5 million shares, or 8%.

This resulted in total shares owned by Nippon Oil & Energy Vietnam and its subsidiary firm at Petrolimex at around 12.87%.

Petrolimex currently holds a 50% market share in Vietnam’s fuel retail sector with a retail network of more than 2,400 petrol stations and nearly 3,000 retail outlets across the country.

In the first quarter of this year, Petrolimex posted revenue of VND38.24 trillion (US$1.66 billion), slightly down 0.6% year-on-year, resulting in a net profit of VND736.2 billion (US$32 million). The figure remained in stark contrast with a net loss of VND1.81 trillion (US$78.7 million) recorded in the same period last year, for which the state firm pointed to a 20% rise in oil price from US$47.62 per barrel to US$59.16 during the period as the main reason. 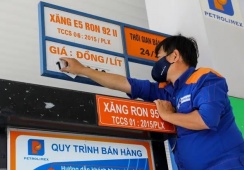 Petrol prices rise by over VND600 per liter