The Hanoitimes - Uniqlo will strive to provide the best garments and hopes they would be favored by Hanoi’s residents.

Japan's Uniqlo Group will open its first store in Hanoi in early March, said Koyama Noriaki, the group’s vice president, at a meeting with Chairman of the Hanoi People's Committee Nguyen Duc Chung on February 20 to talk about his group’s business plan in Hanoi.

The store will be located at Vincom Pham Ngoc Thach in Hanoi’s Dong Da district. It is also one of Southeast Asia's largest showcases of garments, Koyama Noriaki said.

He stressed that Uniqlo will strive to provide the best garments and hoped they would be welcomed by Hanoi’s residents.

Uniqlo will open at least three stores in Hanoi in the time ahead, and a total of 10 to 20 stores across Vietnam, Noriaki added.

Thus, he wished that the Hanoi’s authorities would support the group in finding locations for stores.

Noriaki thanked the municipal authorities for their active support for Uniqlo in the process of finalizing the relevant legal procedures.

For his part, Chairman of the Hanoi People's Committee Nguyen Duc Chung said that the presence of Uniqlo, a big brand from Japan, is good news for Hanoi’s residents and tourists.

Agreeing with Uniqlo's goals in Hanoi in particular and Vietnam in general, the Hanoi mayor added that the two sides would continue to discuss and sign a memorandum of cooperation.

Chung expressed his desire that Uniqlo will continue to expand business and create jobs in Hanoi and encouraged the group to consider cooperating with Vietnam's textile and garment corporations. 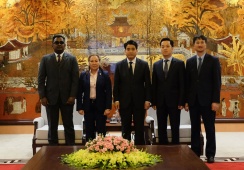 Hanoi willing to enhance cooperation with Malaysia in numerous fields