March will be eventful month with loads of cultural activities

On the occasion of the International Women's Day on March 8 and International Day of Happiness on March 20, Vietnam National Village for Ethnic Culture and Tourism will run a series of activities themed “Little Spring” for the whole month.

The event themed “the Spring in the Muong Village” features an artistic show of Muong ethnic dances and songs; an ethnic gastronomic demonstration with dishes prepared from Ban Flower (Bauhinia) and a photo exhibition of beautiful girls from Thai ethnic group with Ban flowers.

At the exhibition “Our homeland’s islands”, visitors will watch photos, documentary films and artifacts related to the sea and islands of Vietnam, especially the Truong Sa and Hoang Sa (Paracel & Spratly) islands while at the music show titled  “Love Songs from the Sea”, they will be told about the lives of the marines, their bravery and willing to sacrifice for Vietnam's territorial water protection.

On weekends, there will be a cultural event called “The Central Highlands in March - I’m the P’lang flower”, including songs and dances on the spring, which praise the beauty of nature, culture and people of the Central Highlands.

In addition, spring festivals,  homestay travel programs, culinary experiences, and folk games will also be held on weekdays and weekends to introduce the culture and customs of the 54 ethnic groups of Vietnam.

These cultural activities are aimed at promoting cultural exchange among ethnic groups in Vietnam as well as attracting more tourists to the National Village for Ethnic Culture and Tourism. 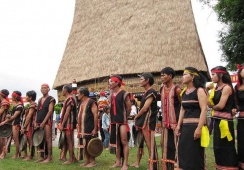 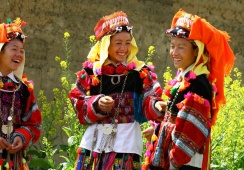