In theory, it is correct to streamline administrative procedures to ensure people’s right of residency and avoid red tape, but urban migration also needs to be controlled.

Around one million people living in Hanoi with temporary resident status would officially become the city’s residents if conditions for registering permanent residency are removed, thus putting pressure on the city’s budget and socio-economic infrastructure, Secretary of the municipal Party Committee Vuong Dinh Hue said on June 9.

According to the 2019 census, Hanoi has more than eight million residents, Hue was quoted by VnExpress as saying at a meeting on June 9. If requirements for permanent residency registration in the capital city are removed as per the draft amended Law on Residence, the city’s population will increase by about one million.

Currently, a person needs to live during two to three years in Hanoi on the condition of temporary resident status continously to be eligible to register permanent residency.

"In theory, it is correct to streamline administrative procedures to ensure people’s right of residency and avoid red tape, but urban migration also needs to be controlled," Hue said.

The Law on Capital City promulgated in 2012 provides the conditions for registering permanent residency in Hanoi. However, under the draft amended Law on Residence, those conditions would be removed to ensure equal rights of residence for all Vietnamese.

The draft amended Law on Residence is expected to remove the population management through permanent residence booklet, or “ho khau”, replacing it with personal identification number.

The booklet has been in effect since the 1960s as an instrument of public security, economic planning, and population management. In the post-war period, the booklet was used as a means to ration food and apply jobs under the then planned economy.

But in the new context of economic reforms since the late 1980s and a socialist oriented market economy, ho khau has been still in place to prevent massive rural to urban migration, to no avail.

The booklet has come to signify Vietnam's excessive red tape. It is required in most administrative procedures including filing a birth certificate application, enrolling school, getting married, buying a house or registering a vehicle.

The decades-old management method is considered backward and aggravate red tape by tying one person’s life and career to a particular city or province. 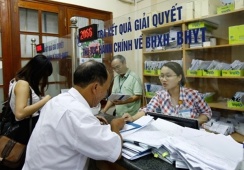 Half of city populations need to use public transport