The Hanoitimes - Normally, Thanh Nhan Hospital in Hanoi admits about 100-130 patients per day, but the number of emergency cases fell to 60-70 last week.

One week after more severe penalties for drunk driving are implemented, the number of alcohol-related road crash has declined sharply, VnExpress reported.

Vu Xuan Hung, head of the Department of Orthopedic Trauma under Thanh Nhan Hospital in Hanoi, was quoted as saying on January 8 that the number of patients hospitalized for traffic accidents has decreased by a half over the past week.

Normally, the hospital's emergency department admits about 100-130 patients per day, but there were only 60-70 emergency cases last week.

"Especially, no patients have been admitted to the hospital due to alcohol related traffic accidents," Hung said.

Hung stressed that the result is thanks to the new Law on Prevention and Control of Harmful Effects of Alcoholic Beverages and a new regulation imposing heavier penalties on drunk driving.

Do Manh Hung, deputy head of the General Planning Department under Vietnam – Germany Friendship Hospital, said that from January 1 to 6, the hospital served 305 traffic accident victims. Of them, 46 cases are related to alcohol, a decrease of more than 4% year-on year.

According to Hanoi 115 Emergency Call Center, every day it handles reports of about 90 emergency cases, of which 20% are accidents caused by drunk drivers. However, in the first week of 2020, the rate of people hospitalized for alcohol related road accidents decreased to 8%.

"The new Law on Prevention and Control of Harmful Effects of Alcoholic Beverages has helped reduce the pressure on the health sector," said Dan. 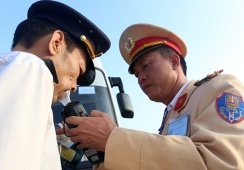 Bicyclists in Vietnam to be fined if caught drunk driving 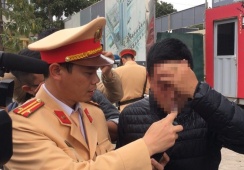