The Hanoitimes - Hanoi said the drill performance is a serious violation of Vietnam's sovereignty.

Vietnam said Thursday that Taiwan’s military exercises in Truong Sa (Spratly) Islands must not be repeated as they violate Vietnam’s sovereignty.

The performance of live-fire drills around Ba Binh Island of Vietnam’s Truong Sa is a serious violation of Vietnamese sovereignty over this archipelago, threatening peace, stability, safety and maritime security, escalating tensions and complicating the situation in the East Sea (referring to the South China Sea), Spokesperson Le Thi Thu Hang of Vietnam’s Ministry of Foreign Affairs (MOFA) said at a press conference held in Hanoi on December 3.

“Vietnam strongly protests the drills and demands Taiwan not to make any recurrence of those violations in the future,” Ms. Hang said in a statement in response to questions on the live-fire drills on Ba Binh (Itu Aba) Island conducted by Taiwanese army on November 24.

Ms. Hang added that Vietnam has full legal basis and historical evidence to assert its sovereignty over Hoang Sa (Paracel) and Truong Sa (Spratly) archipelagoes in accordance with international law.

Vietnam’s Ba Binh, which is the largest natural island on Spratly archipelago, was illegally occupied by Taiwan in 1956.

At the press conference, the spokesperson also affirmed that all activities on Hoang Sa and Truong Sa archipelagos without Vietnam’s permission are violations of Vietnamese sovereignty and international law.

She made the statement regarding Vietnam’s response to China’s recent moves in the Eat Sea, including the resumption of tourism ships to Vietnam’s Hoang Sa and the deployment of hospital ship to the Fiery Cross Reef in Vietnam’s Truong Sa.

Hanoi demands Beijing to respect Vietnam’s sovereignty over Hoang Sa and Truong Sa, cancelling tours to Hoang Sa and stopping other activities that escalate tensions and complicate the situation.

Historian Nguyen Nha said that Vietnam’s Ba Binh Island, which is 489,600 square meters, was seized by Taiwan in October 1956. It has conducted militarization on the island since then.

In another move, China seized Vietnam’s Phu Lam Island (Woody Island), the largest island in the Spratlys in the same year. 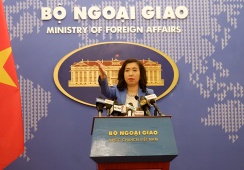