The Hanoitimes - Local airlines could see a decline in revenue of up to VND65 trillion (US$2.7billion) due to the pandemic, much higher than an earlier estimate of VND30 trillion (US$1.27 billion).

The Vietnamese Ministry of Transport has proposed support policies that include removal of import and environmental taxes for airlines that are suffering from the Covid-19 pandemic.

The proposal includes exemption of the import tax and environmental protection tax for aviation fuel from January 23 to the end of 2020 or 90 days after the government officially declares the pandemic has been contained. In case there is no state budget-sourced relief funding for air carriers, the ministry requested a decrease of 50% on import tax and environmental protection tax on aviation fuel.

In addition, the airlines, through the transport ministry, also proposed to be extended from tax payment and other budget contributions. The ministry requested to waive and defer payment of corporate income tax, personal income tax and foreign contractor tax from January 23 to the end of 2020 for all the airlines.

The ministry also asked the prime minister to assign the State Bank of Vietnam to help the carriers reschedule bank loans, extend loan payment, free them from penalties on late payment during the pandemic.

On March 15, following a proposal sent by the Ministry of Transport to the Ministry of Planning and Investment on support for air carriers, Airports Corporation of Vietnam (ACV) has exempted and reduced a number of aviation service fees.

The decision has been valid from March 1 to the end of August 2020.

Due to the pandemic, 98% of airplanes have been grounded, local airlines could see a decline in revenue of up to VND65 trillion (US$2.7billion), much higher than VND30 trillion (US$1.27 billion) previously estimated ACV. 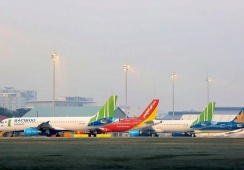