The Hanoitimes - Vietnamese female officers not only complete the task, but they also inspire others and help bring Vietnamese values closer to international friends.

The UN Development Program (UNDP) has reaffirmed its commitment to promoting participation of women, including female officials from Vietnam, in the UN peacekeeping and peacebuilding operations.

“Supporting women’s participation, empowerment and leadership in all fields is one of the cornerstones of our support in Vietnam,” said UNDP Resident Representative in Vietnam Caitlin Wiesen. “We are committed to deepening our partnership with the Government of Vietnam to continue strengthening capacities for increasing women’s contribution to Vietnam’s future deployments.”

In recent years, Vietnam has increased its engagement in global peacekeeping efforts. In 2017, Vietnam sent the first female staff officer, major Do Thi Hang Nga, to join the UN peacekeeping mission in South Sudan. Currently, Vietnam has 10 female officers on duty in Level II Field Hospital, accounting for nearly 17% of the total 63 members of the hospital. This rate is higher than the set target of the UN.

Despite the difficulties in their daily lives, female officers of the People's Army of Vietnam in South Sudan and the Central African Republic not only fulfilled their duties but also proactively proposed to the UN Peacekeeping Mission many extra-duty activities to help local people, such as voluntarily teaching homeless children, donating gifts to the poor, and guiding local people on farming activities.

The Covid-19 pandemic makes their military lives even more challenging. In the Central African Republic, lieutenant colonel Nguyen Thi Lien, a training staff officer, took initiative to hire sewing machines, bought materials, sew over 500 facemasks and gave them, for free, to colleagues in the Peacekeeping Mission and the people of Bangui Capital.

“Not only do they complete the task, but they also inspire others and help bring Vietnamese values closer to international friends,” said senior lieutenant general Nguyen Chi Vinh, deputy minister of National Defense. “We hope that, for Vietnamese female officers in particular and female officers in the United Nations Peacekeeping Operations in general, their living conditions will be paid greater attention to.

In addition, they should be considered for leadership positions that they deserve. Their roles and contributions should be recognized and appreciated not only within their missions but also in the world. Engaging women in peacekeeping forces is a typical example of gender equality, a cause that the United Nations is promoting,” said Mr. Vinh.

To mark the 20th anniversary of UN Security Council Resolution 1325 on Women, Peace and Security (October 31, 2020), UNDP, in collaboration with Vietnam’s Ministry of Defense and the embassies of Canada and Norway in Vietnam, has premiered a video featuring initiatives and contributions of countries and organizations in the world to promote women's participation in the peacekeeping operations.

Ms. Caitlin Wiesen introduced a very useful tool for parliamentarians to progress the Women, Peace and Security agenda. “Recognizing the important role that parliamentarians have played and continue to play in supporting the peace process, UNDP has developed a Global Handbook: Parliaments as Partners Supporting Women, Peace and Security Agenda,” she said. “The handbook was launched with the generous support of the Government of Norway in Oslo last year, providing comprehensive guidance on how to work with stakeholders in advancing the women, peace and security agenda.”

“The Elsie Initiative for Women in Peace Operations is about action,” said Deborah Paul, Ambassador of Canada to Vietnam. “It is a pilot project that aims to catalyze transformational change in increasing uniformed women’s meaningful participation in UN peace operations. The Elsie Initiative prioritizes including and listening to women peacekeepers who have deployed, and have first-hand experience being on missions. We listened to women peacekeepers when designing the Initiative, and we will continue to incorporate their perspectives in every aspect of our work.”

“Security Council Resolution 1325 did represent a shift,” said Grete Løchen, Ambassador of Norway to Vietnam. “With Norway’s experience in UN peace keeping operations since 1949, we know having a high percentage of women in operations and missions can help to increase trust and success. Women are not just victims of conflicts but must be active participants and shaping all peace efforts.

Norway is very proud to have major general Kristin Lund as the first woman to serve as Force Commander in a UN Peacekeeping Force in 2014. She has become an important role model and champion for the UN, gender and leadership. And I do hope that one day she will be able to share her experiences with Vietnam’s peacekeeping forces.

Next year Norway and Vietnam will work together as non-permanent members of the UN Security Council (UNSC). I’m sure we will have great opportunities to jointly work on promoting women’s active participation in peace and security efforts regionally and globally.” 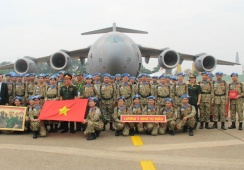 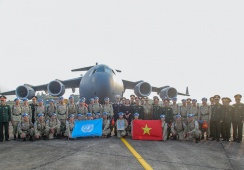 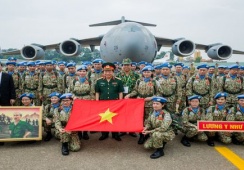