This would result in revised GDP per capita of US$2,985, higher than the preceding number of US$2,343, stated the GSO in a statement announcing the result of GDP revision in the 2010 – 2017 period held Friday.

According to the GSO, after revision, “the GDP structure now better reflects the shift of the economy.” The agro – fishery – forestry expanded an average of 14.7% in the 2010 – 2017 period, down 2.7 percentage points from previous figures; the construction and industrial sector saw increases of 33 – 34.8%, up 1.8 percentage points; and the services rose by 39.2 – 41.2%, up two percentage points.

Due to a change in the size of the economy, in addition to higher GDP per capita, other key economic indicators in 2017 are now adjusted accordingly. For example, the ratio of public debt to GDP as of the end of 2017 has been revised dow to 48.8%, fiscal deficit to 2.8%, and the ratio of state budget expenditure to GDP to 21.5%, among others.

The GSO pointed to five reasons that lead to different GDP results, in which new data emerged from the general survey is considered to have the biggest impact, leading to an average increase of VND589 trillion (US$25.51 billion) in GDP annually, accounting for 63% of the incremental level.

The second reason is new data from administrative documents that led to an average increase of VND305 trillion (US$13.21 billion) in GDP annually, or 32.6% of the increased level.

The GSO said a revision of the GDP is aimed to better reflect the economic performance and efficiency of economic policies.

The GSO reiterated its previous statement that revising GDP is a common practice globally, and countries such as the US, Canada, Germany, Russia, Italy, Indonesia, among others, have made similar moves since 2010.

In July 2013, the US revised its GDP growth of the previous year and added US$506 billion to its economy.

GSO Head Nguyen Bich Lam previously said this was not the first time the GSO revises the GDP calculation. His agency in 2013 revised the GDP in the 2008 – 2012 period. Six years ago, the revision only focused on certain sectors such as banking, finance, insurance and real estate, Lam stated, noting this time the GSO would include all economic groups in the economy, except the illegal and shadow economies, due to the lack of data. 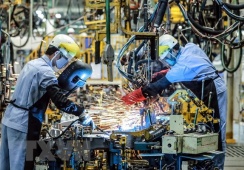