Vietnam’s Prime Minister Nguyen Xuan Phuc has decided to increase spending on holding elections to the National Assembly and People’s Council at all levels for the 2021-26 term.

Under the decision dated February 24, the government would give an additional allocation of VND733 billion (US$US$32 million) to central agencies and localities for holding the universal suffrage.

This is the first additional spending, the government said in the document, giving no details of the total budget for the elections.

The national election is scheduled to take place on May 23, 2021.

Central bodies and ministries will receive VND17.5 billion while 63 cities and provinces will get the remaining amount of VND716 billion.

The National Assembly’s Office will be allotted the highest amount among central bodies and the Ministry of Home Affairs is the biggest recipient among ministries.

According to the Ministry of Finance, the spending will go to building and printing documents, reports, publications; running news portals of the National Election Council; purchasing equipment for the council’s office; security and dissemination of the elections; holding conferences ahead of the elections; and the organization and scrutiny of the voting. 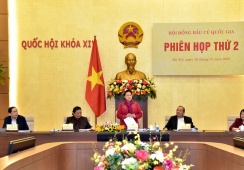