The Hanoitimes - Vietnam is preparing for the repatriation of its citizens if the situation in South Korea, Japan, and Taiwan (China) worsens.

Vietnam's Minister of Labor, Invalids and Social Affairs Dao Ngoc Dung on Monday asked related authorities to build plans for the repatriation of Vietnamese nationals as the outbreak of the coronavirus disease 2019 (Covid-19) in South Korea is unexpectedly worsening.

The Department of Overseas Labors (DOLAB) under the Ministry of Labor, Invalids and Social Affairs needs to work out plans to bring citizens back to the home country, quarantine, and offer medical treatment for groups of less than 1,000 people, 1,000- 5,000, and 5,000-20,000 people, local media reported.

The department is asked to make plans which ensure the rights of laborers working aboard, especially in South Korea and Japan.

Statistics by the embassy of Vietnam in South Korea show that there are approximately 200,000 Vietnamese nationals living, working, and studying in South Korea, including 18,502 in Gyeongsangbuk-do (North Gyeongsang province), 8,285 in epidemic-hit Daegu city, and 333 people in Cheongdo.

According to Deputy Head of DOLAB Nguyen Gia Liem, the number of Vietnamese workers in Japan hits 220,000 and 59,000 in South Korea.

In another move, the Vietnamese embassy in South Korea on February 24 advised Vietnamese citizens not to leave this country, restrain from traveling, and not to go to epidemic-hit areas to prevent the spread of the Covid-19.

Vietnam’s Ministry of Foreign Affairs has informed that it has conducted a number of measures to protect Vietnamese citizens abroad, mostly in epidemic-stricken zones.

In Vietnam, the minister of MOLISA has asked local authorities to check laborers that come from and travel across epidemic-hit areas, most localities in China, South Korea, and Japan and prepare for quarantine plans for groups of less than 100 people to more than 2,000.

As of February 25, South Korea reported 893 people infected with the new coronavirus.

Vietnam has 16 people found positive with the virus and all of them have recovered. 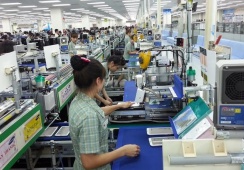