The Hanoitimes - Currently, Vietnam has suspended granting visa to citizens from China, South Korea, and Italy due to their increasing number of infected people.

Vietnam’s Prime Minister Nguyen Xuan Phuc on Monday agreed to halt visa-free entry for citizens of a number of the European Union (EU) and the UK for fears of the virus spread.

Under a proposal by the National Steering Committee for Covid-19 Prevention and Control, the government will halt the visa waiver program for visitors from eight European countries namely the UK, Denmark, Norway, Finland, Sweden, Germany, France, and Spain.

These countries are important sources of tourists for Vietnam. The Southeast Asian country waived visas for citizens of these countries in 2015 in a move to attract visitors with strong purchasing power.

The visa suspension will also apply to any countries outside the EU that has more than 500 infected cases plus more than 50 new cases per day, or any foreign visitor who has symptoms of Covid-19.

Since the new coronavirus has spread early this year, Vietnam has suspended visa-free entry for visitors from China, South Korea, and Italy, three countries with the largest number of infected people.

Vietnam found a new infected case, identified as the 17th, on March 6 after 22 days without new one. The country has entered the “second round of the battle against the epidemic”, Deputy Prime Minister Vu Duc Dam, who is head of the National Steering Committee on Covid-19 Prevention and Control, said at a meeting on Sunday.

This round is of more difficulties because of the widespread outbreak that has stricken more than 100 countries, he said.

“We need to prevent risk of epidemic from various directions instead of few before,” the deputy PM warned. “We won the first round and will definitely win the whole battle,” he emphasized.

In addition, the Ministry of Health is tasked to provide locals with simple safety protocol that are conveyed via different channels regardless of media or sign boards.

People should be instructed on safety indoor and outdoor like public means of transport, restaurants, supermarkets, offices, factories, and the crowd, Mr. Dam noted. Authorized agencies need to warn Vietnamese people to restrain traveling abroad or epidemic-hit countries, he added.

According to the deputy PM, Vietnam has prepared for different scenarios, including that of thousands of infected cases. Preventing, quarantining, zoning, and eradicating the epidemic become the paramount measures currently, he stressed. 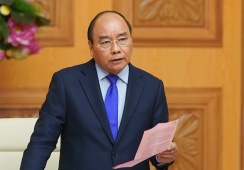