The Hanoitimes - The ASEAN business community could be a “safe haven” as some major multilateral institutions are under pressure to reform, said Prime Minister Nguyen Xuan Phuc.

With high respect for international law and cooperative mechanism towards stability and sustainability, the Association of Southeast Asian Nations (ASEAN) is capable of competing for foreign direct investment (FDI) from a shift in regional supply chains, according to Prime Minister Nguyen Xuan Phuc.

Facing unprecedented challenges from the Covid-19 pandemic, the ASEAN community has shown its courage and actively cooperated with partners such as the US, EU, Australia, Japan, China and South Korea, said Mr. Phuc during the ASEAN Business Forum 2020 themed “Unlocking the Region’s Potential” held online on August 25.

Mr. Phuc added with the combined GDP of nearly US$3 trillion and a population of over 630 million, the Southeast Asian region is a big market matching business ambitions of multinationals.

Vietnam’s entry in ASEAN 25 years ago was the first step in the country’s efforts for global integration, which has resulted in the signing of 13 free trade agreements (FTAs) so far, including major ones such as the Comprehensive and Progressive Agreement of Trans – Pacific Partnership (CPTPP) in 2019 and the EU – Vietnam Free Trade Agreement (EVFTA) in 2020.

According to Mr. Phuc, Vietnam is opening its door for foreign investors with a constantly improving business environment, which is home to 32,000 FDI projects worth over US$380 billion from 140 countries and territories.

Referring to ASEAN vision to 2025 and 2030, Mr. Phuc expected stability and unity among ASEAN members, adding the region should realize its central role in regional economic cooperation.

While some major multilateral institutions such as the World Trade Organization (WTO) is under pressure for reform, the ASEAN business community could be a “safe haven” for cooperation and development, Mr. Phuc asserted.

The Vietnamese PM added the ASEAN is giving priority to upgrading both hard and soft infrastructure, including legal framework, administrative reforms, or investments in sea ports, airports, energy infrastructures, among others.

Putting the benefits of the people and community at the center, ASEAN members are narrowing the development gap and looking for more partnership in the Greater Mekong Sub-region to attract new investment capital.

The Vietnamese PM stressed the ASEAN highly regards the equal partnership between the business community and governments. As the latter put in place platforms for enterprises to grow, they are in turn obliged to contribute to socio-development and support the government for greater efficiency in operation.

The ASEAN and Vietnam welcome enterprises to do business and their successes, Mr. Phuc concluded. 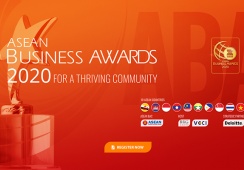 ASEAN Business Awards - the most prestigious awards in ASEAN 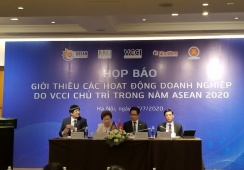 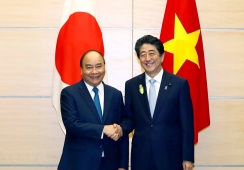