The Mekong Delta with 17% of Vietnam’s population has made up one-third of the country’s total caseload.

Vietnam’s Deputy Prime Minister Vu Duc Dam asked local authorities in five days need to fulfill injecting the first shots to adults aged above 18 in the Mekong Delta and Central Highlands after the two regions saw a hike in the number of infections over the past week.

Dam, who is head of the National Steering Committee for Covid-19 Prevention and Control, made the request last weekend to authorities of Can Tho, Bac Lieu, Soc Trang, Kien Giang, An Giang, Tien Giang, Dak Lak, and Gia Lai.

The government’s Special Task Forces against Covid-19 and representatives of the armed forces, health and transport sectors need to coordinate the allocation of vaccines and facilitate the inoculation in eight localities.

The authorized agencies are also tasked with providing the second jabs on time and vaccinating children aged between 12 and 17.

Meanwhile, the health sector is required to provide good treatment to mitigate fatalities.

Since late October, the Mekong Delta and Central Highlands have reported a surge in coronavirus infections while their vaccination coverage remains low, leaving difficulties to grassroots levels.

On October 30, the Mekong Delta Province of Bac Lieu reported 404 cases, the highest daily figure in the ongoing outbreak that flared up in Vietnam in late April. Some areas in the province turned to “red zones” or very high-risk.

An Giang Province, where borders Cambodia, recorded more than 1,100 cases who returned from affected areas over the past weeks, forcing authorities in some places to raise disease warning alerts.

Can Tho, the political, socio-economic, and cultural hub of the Mekong Delta, saw a three-digit number of daily infections for the past two weeks. The pandemic evolution has forced local authorities to recheck the pandemic situation to take safety measures in production establishments.

The Central Highlands province of Dak Lak reported 193 cases out of 100,000 population and the number is on the rise. The situation worried the local government as its health capacity remains weak.

Gia Lai shared the same concerns as it reported dozens of cases per day in early November while Lam Dong, which is home to the “City of Eternal Spring” Da Lat, also confirmed dozens over the past days after it detected first cases who are linked to affected areas.

Covering 13 cities and provinces, the Mekong Delta, accounting for 17% of the country’s total population, reported the volume of Covid patients with 35.7%, 31.4%, and 30% of Vietnam’s total number of infections detected on November 2, 3, 4, respectively.

After Ho Chi Minh City, the epicenter of the pandemic, relaxed restrictions in late September, flows of workers returned to their hometown in the Mekong Delta, leaving pressure on the anti-pandemic capacity in the region.

It’s worrisome that both Mekong Delta and Central Highlands have one thing in common: a low vaccination rate.

As of November 8, the rate of the first shots administered to people aged above 18 in localities ranged between 65% and 85%, while the coverage rate of the second shots was about 30% on average.

At the time of writing, more than 90 million doses have been administered in Vietnam. Accordingly, the rate of the first-shot coverage rate among adults was 83%, and the second-jab was about 40%.

According to the Ministry of Health, about 124 million doses of vaccines have arrived in Vietnam. The ministry is allocating 15 million doses to the most affected areas. 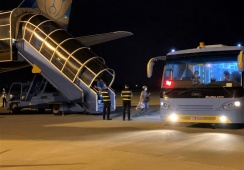