The Hanoitimes - To lure more foreign investment in infrastructure, Vietnam needs to have a clear public-private partnership (PPP) framework.

Many investors have shown their interest in Vietnam’s infrastructure projects as the government has affirmed to continue focusing on infrastructure development with the participation of the private sector.

Prime Minister Nguyen Xuan Phuc told a recent meeting between the government and localities that in 2020, the government will boost construction of many major infrastructure projects such as North-South Expressway, Long Thanh International Airport, a number of highways nationwide, and facilities in the power, water, traffic, and urban development sectors.

“Private investors will be permitted to participate in these projects. This is aimed at boosting economic growth and facilitating the attraction of more investment,” Phuc noted.

In fact, investors have eyed a number of domestic infrastructure projects. As for the North-South Expressway, for example, the project’s management board has received applications from 32 domestic investors and joint ventures.

Japanese investors have so far also expressed their desire to invest in Long Thanh International Airport, inter-regional expressway, urban railways in Hanoi, Ho Chi Minh City and other cities, and especially the Hanoi-Ho Chi Minh City high-speed railway – the largest infrastructure project in Vietnam for the next decade.

It was estimated that Japan's infrastructure investment in Vietnam’s pending projects reached some US$209 billion – more than half of Japan’s total. That included a US$58.7 billion high-speed railway between Hanoi and Ho Chi Minh City.

According to the Infrastructure Working Group of Vietnam Business Forum (VBF), the government’s fresh message to continue investing heavily in infrastructure development in a bid to attract more investment is important given Vietnam is growing and urbanizing swiftly. In order to continue along this trajectory, it needs massive amounts of new infrastructure.

Asian Development Bank estimated that Vietnam would need at least US$16.7 billion per year on average for the 2015-2025 period to finance its infrastructure development needs. As the state funding is limited, Vietnam needs private investment to fill the financial gaps.

Experts also warned that transport and logistical infrastructure bottlenecks will continue to weigh on the growth of the industrial sector in 2020, which accounts for around 16.5% of the Vietnamese economy. Reports from General Statistic Office of Vietnam showed that the growth of the country’s industrial sector eased to 7.3% in the last quarter of 2019, from 10.4% in the third quarter.

“The US-China trade war has accelerated a structural shift in low-end electronics and textiles manufacturing out of China and into ASEAN, with Vietnam being a major beneﬁciary. However, the rush to set up operations and export out of Vietnam has put considerable stress on existing road and port infrastructure, resulting in severe congestion in and around major cities such as Ho Chi Minh City and Hanoi, and also week-long delays at ports,” analysts from financial information service provider Fitch Group said.

However, to lure more foreign investment in infrastructure, Nobufumi Miura, chairman of the Japanese Chamber of Commerce and Industry, said that it is necessary to have a clear public-private partnership (PPP) framework to deploy infrastructure projects.

In order to encourage foreign enterprises’ participation in PPP projects, it is vital that the government clarifies the risk allocation between the government and the private body and provides comprehensive support to ensure a reasonable return from their investment, Miura said. 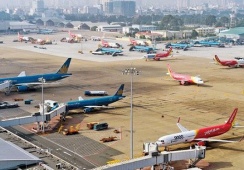