An exceptional exhibition by Mai Trung Thu (1906 - 1980) entitled ‘Écho d’un Vietnam Rêvé’ (Echo of A Dreamed Vietnam) will run from June 16 to October 24 at Ursulines Museum in Macon, France.

The exhibition is divided into three components: Thu’s youth in Vietnam from 1906-1937, his stay in Macon from 1940-1942 when his style underwent a radical change, and his exercise of the profession as a painter in France from 1938-1980. The vast majority of the works presented have never been shown to the public.

The exhibition is organised in partnership with the Musée Cernuschi, an Asian art museum in Paris. with the support and participation of Mai Lan Phuong, the artist’s daughter.

During his career, Mai Trung Thu favoured paintings on silk the most. According to art critics, Thu’s mastery is unparalleled: he knows how to bring out the brilliance of the silk and the subtlety of the colour. His compositions are rigorous and balanced, the line is elegant and precise. Depth is rendered by a layering of planes that borrows from traditional Chinese and Japanese narrative painting but also evokes the Italian and Flemish primitives.

His favourite theme, the young and graceful woman who is typically Vietnamese thanks to connotations such as her clothing and some clues in the furniture, accessories or architecture.

He also likes to depict the tenderness of a mother and her child, children and their games as well as the scenes of everyday life, which evoke refined and simple pleasures such as young girls are walking, arranging flowers in a vase, having tea with friends.

Some typical paintings of the artist that will be displayed at the exhibition include La Mariée (1935), Jeune Fille peignant ses cheveux (A Young Girl Combing Her Hair) (1956), Consolation (1961), and Costume de fête (Party costume) (1963).

Earlier, the ‘Portrait of Mademoiselle Phuong’ of Thu became the most expensive Vietnamese painting ever. The painting has fetched  US$3,1 million at the auction ‘Beyond Legends: Modern Art Evening Sale’ that took place on April 18 by Sotheby's Hong Kong.

Being among the first graduates of the École des Beaux-Arts de 'Indochine (Vietnam University of Fine Arts) in Hanoi, Mai Trung Thu was a painter whose oeuvre celebrated the innocence of rural Vietnam. His participation in the International Exhibition of Decorative Arts in Paris in 1937 led him to settle down in France. 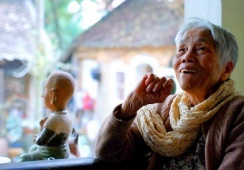