Through a live television program entitled “The whole country joins hands for the poor” which was held in Hanoi on October 17, Party General Secretary and State President Nguyen Phu Trong called on the entire nation to support the poor and flood victims in the central region, Kinh Te & Do Thi reported.

At the program, President of the Vietnam Fatherland Front Central Committee (VFFCC) Tran Thanh Man conveyed Party General Secretary and President Nguyen Phu Trong’s deepest condolences for the loss of lives and regards to officials, soldiers and people in the flood-hit areas of the central region.

The top leader also asked local Party committees, governments, the Vietnam Fatherland Front and agencies to urgently prevent and fight floods and storms; overcome the consequences; and promptly help people to stabilize their lives and business.

On the occasion, Party General Secretary and President Nguyen Phu Trong called on people in the country and overseas Vietnamese to uphold the spirit of solidarity to support the poor and people who are living in difficult circumstances.

Speaking at the program, Prime Minister Nguyen Xuan Phuc emphasized that the Party and State always consider hunger eradication and poverty reduction a key policy and an urgent task for achieving sustainable development.

The profound humanistic significance of the policy towards the poor has been turned into concrete actions implemented by the agencies at all levels, Mr. Phuc added.

He also noted that the government has mobilized all enterprises, organizations and individuals both in the country and abroad to continue to join hands with the Party, State and the VFF to further contributing to the poverty reduction and ensuring the social welfare.

At the event, PM Phuc as well as other leaders gave donations for flooding and storm victims in the central provinces.

Some 220 units, organizations and individuals also offered their support on the occasion and committed to donate a total of nearly VND2.4 trillion (US$103.5 million) to the “Fund for the poor and social welfare program.”

As of late Sunday, as many as 80 deaths have been reported during floods and 38 other missing. Hundreds of thousands of houses have been inundated. 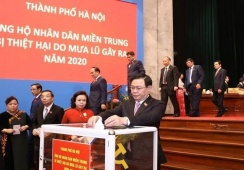 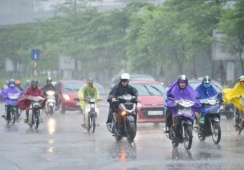