Vietnam is a key pillar in India’s Act East Policy.

A ceremony commemorating the 50th anniversary of Vietnam-India (January 7, 1972- January 7, 2022) was organized today [Jan 6] in Hanoi with the participation of high-ranking leaders.

She said there have been eight exchange visits paid by top leaders including prime minister, president, and parliament chairman over the past five years.

On this occasion, a photo exhibition is taking place in Hanoi showcasing Indian land and people and the cooperation between the two peoples.

In a recorded speech, Indian Vice President M. Venkaiah Naidu affirmed that India considers Vietnam a key pillar in its Act East Policy and an important partner in the Indo-Pacific Vision.

Indian Ambassador to Vietnam Pranay Verma said that the past 50 years have been a remarkable period of mutual companionship as both India and Vietnam have together overcome difficulties to pursue their national building strategies.

He said the two countries share the same vision of development as two aspirational societies with young populations yearning for progress and prosperity.

Sharing with The Hanoi Times, the ambassador said the five decades mark the milestones in the bilateral relations that is proved through tough times. Noticeably, the commemorations would be held across Vietnam as part of efforts to demonstrate the close relations with localities in the Southeast Asian country.

The ambassador said that closed cooperation in 2021 will largely facilitate the journey ahead, noting that the two countries focused not only on bilateral relations but mutual support in international forums.

Over the past years, Vietnam worked as a bridge promoting Indian engagement in ASEAN and the Indo-Pacific to enable India to promote the vision of a “free and open Indo-Pacific” to exercise freedom of navigation and overflight.

In 2020-2021, both Vietnam and India were non-permanent members of the United Nations Security Council and they supported each other during their term. India extended its support to Vietnam during the presidency month and in releasing resolutions.

In addition, India has supported Vietnam in its peacekeeping mission in South Sudan over the years.

Meanwhile, both countries intensified cooperation during the Covid-19 pandemic with efforts to maintain the supply chain, focusing on pharmaceuticals and Buddhist tourism. The model has attracted a large number of Vietnamese visitors.

Buddhist tourism explores how Buddhists, government organizations, business corporations, and individuals in India participate in the re-imagining of Buddhism through tourism.

The relationship between Buddhism and religious tourism has increasingly become an important topic gaining popularity. Across India, locations and physical sites associated with Buddhism or the historical Buddha are now part of tourism circuits, and tourism developments have contributed to the revitalization of Buddhist sites. 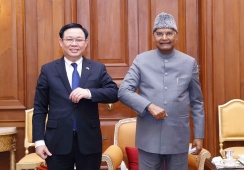 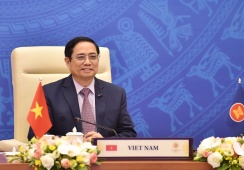 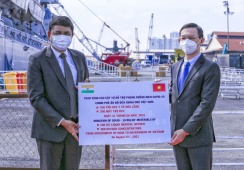