Vietnam loses 4.45 – 5.64% of its GDP annually due to mortality risks posed by air pollution.

Vietnam’s economic cost due to air pollution amounts to between $10.82 billion and $13.63 billion per year, VnExpress quoted a study by the National Economics University Hanoi as saying.

At a conference on January 14, Associate Professor Dinh Duc Truong, head of the National Economics University’s Department of Environment, Climate Change and Urban Studies, said that the damage caused by air pollution to Vietnam equals to 4.45 – 5.64% of its GDP annually.

Approximately 50,000 Vietnamese die each year due to air pollution, three times the number of traffic-related deaths, Truong said, adding that his department has been studying the impacts of air pollution in Vietnam for ten years.

Explaining further the basis of the above-mentioned study, Truong said that he used the binary random assessment model which is being used in the US as a basis for compensation for environmental damage.

"Vietnam has been dubbed as the polluting paradise caused by FDI," said Truong.

Professor Tran Tho Dat, president of the National Economics University, said that air pollution mainly results from economic activity. Therefore, efficient policies are vital to reduce pollution.
"More research is needed to assess the impact of air pollution on the economy. Only when our problem is accurately assessed then can policy proposals be effective," Dat said.

Assessing the level of air pollution, Dr. Hoang Duong Tung, president of Vietnam Clear Air Partnership, said that the annual air pollution cycle in Vietnam is from October to February of the following year.

In 2019, the number of days with air quality index reaching the hazardous level was higher than that of previous years. In December alone, there were pollution episodes of more than two weeks, with the unhealthy level reaching 200 (represented by the purple color on the air pollution chart). 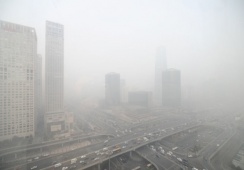