All countries could write own futures: Wendy Sherman

The US diplomat noted that less powerful countries can make the best decisions for their own futures free from coercion.

US Deputy Secretary of State Wendy Sherman has highlighted a future where all countries play by the same set of transparent agreed-upon rules during her trip to three ASEAN member states.

Sherman stressed the importance of a future where less powerful nations can make the best decisions for their own futures, free from coercion, in her speech delivered at the Fulbright University Vietnam on June 11 on her week-long trip which will end on June 14 to South Korea, the Philippines, Vietnam, and Laos.

The Deputy Secretary’s travel to the region reflects the US’ continued commitment to the Indo-Pacific and follows last month’s US-ASEAN Special Summit held in Washington D.C., President Biden’s visit to South Korea and Japan, the Quad Leaders’ Summit in Tokyo, and the launch of the Indo-Pacific Economic Framework.

In her remarks on the Indo-Pacific strategy, Sherman stated the role of ASEAN member states, saying that the nations have to decide on their future and how they want to proceed forward, affirming the US support in the process.

She said the US absolutely believes in the centrality of ASEAN. “I think the future of ASEAN is strong. It’s a consensus-based organization that always makes things great and difficult because you need to hear everybody’s voices and bring everybody’s voices to the table… We look forward to continuing strong work with ASEAN.”

ASEAN’s ability to be a strong and vibrant organization really relies on the members of ASEAN. The US can help, support, and provide additional funds which we just did US$150 million that we announced to ASEAN for initiatives, including some for maritime that she believes Vietnam will benefit from.

“We want to support ASEAN every way we can to build that strong vibrant future. So that Indo-Pacific can be free, independent, open, interconnected, and prosperous,” she said, adding that they care about tackling the challenges of our time from climate crisis to health security.

She went on the say: “We both believe in the importance of respecting international law and principles like sovereignty and territorial integrity. We both share a common vision for the security of this region one grounded in clear agreed-upon rules that apply for everyone equally not one where might makes right.” Sherman raised the idea for the fact that fully one-third of the global trade passes are through the South China Sea.

Sherman said she believed in youth, who want to make change happen in Southeast Asia in the Indo-Pacific and truly in the entire world and that she’s confident that young people will write the future. “Each and everyone of you has the power to change your community to improve your life and the lives of your fellow citizens” to reach across borders and build connections with other young people”, she stressed.

Sherman gave special notes to young people in Vietnam and the relations between Vietnam and the US. “The changes that I have seen in this country and in its relationship with the US are truly profound and extraordinary.”

She reaffirmed the US respect for Vietnam in the Southeast Asian country’s development drive. “I think it speaks to the vision of both of our countries, it speaks to the respect we have for each other’s systems. We respect each other’s political systems. We don’t wish to change the system of Vietnam. We have created a vibrant growing relationship. We don’t agree on everything we each have histories,” she noted.

“We both want a strong prosperous and independent Vietnam,” she emphasized.

During the visit to Vietnam, Sherman visited Ho Chi Minh City and worked with Secretary of the city’s Party Committee Nguyen Van Nen on June 12. In their talks, the two sides discussed the cooperation potential in hi-tech, smart city, health, finance, infrastructure, and renewable energy.

Climate adaptation was in the spotlight of the meeting in which Sherman hailed Vietnam’s energy transition with the intensified investment in wind power, especially offshore wind.

To make the cooperation possible, Vietnam and the US should proceed with concrete plans, she stated.

Fulbright University Vietnam has been the epitome of the mutual trust and cooperation between Vietnam and the US since the Department of State-funded the Harvard Kennedy School to partner with a Vietnamese university to establish the Fulbright Economics Teaching Program (FETP), Vietnam’s first center of public policy in 1994.

Deputy Secretary of State Sherman was also the keynote speaker of YA’s inaugural seminar on Energy Economics and Policy. 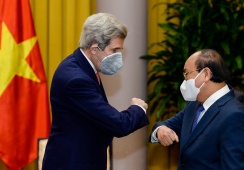 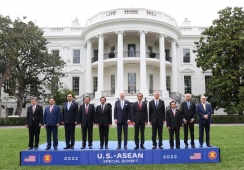 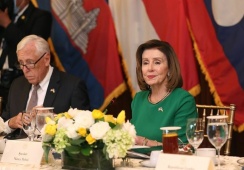