Australia and Canada shared the same view with Vietnam on describing UNCLOS as the legal framework for settling maritime challenges.

As many as 200 representatives from 27 countries in the ASEAN Regional Forum (ARF) have addressed emerging maritime issues at a workshop held on June 1-2.

Vietnamese Deputy Minister of Foreign Affairs Pham Quang Hieu described the 1982 United Nations Convention on the Law of the Sea (UNCLOS) as a “Constitution” of the ocean, creating a legal framework for the settlement of maritime challenges, including emerging ones.

Hieu made the statement at the two-day workshop held both online and in-person brought together delegates from ARF countries, regional and international organizations, and diplomatic missions.

He emphasized that all disputes in the South China Sea (called East Sea by Vietnam) must be resolved by peaceful means in accordance with international law, including UNCLOS 1982 to contribute to strengthening trust among the parties, promoting peace, security, and prosperity in the region.

This is the third ARF workshop on the same topic, following the success of the previous seminars held in Nha Trang and Hanoi in 2019. This conference offers a forum for participants to discuss more specific challenges in maritime management in the region, on the basis of the application and implementation of UNCLOS 1982 and related international documents.

The event was jointly held by Vietnam’s Ministry of Foreign Affairs, the EU, and foreign ministries of India, Australia, and Canada, as well as the Canadian and Australian ambassadors to Vietnam.

It marked part of activities implementing the Hanoi Plan of Action II for the 2020-2025 period, and the ARF Ministerial Statement on Enhancing Cooperation among Maritime Law Enforcement Agencies, initiated by Vietnam and adopted in 2016.

The Australian and Canadian Ambassadors to Vietnam also shared the same view on the role of UNCLOS in solving international disputes.

Canadian Ambassador Deborah Paul affirmed her support in managing and resolving disputes by peaceful means in accordance with international law.

At the event, delegates agreed that it is necessary to study the possibility of developing a regional document on the humane treatment of fishermen in conformity with international law. They highlighted the participation of all stakeholders namely state agencies, private sector, international and regional organizations as well as non-governmental organizations.

They also discussed cooperative solutions against degradation and marine biodiversity, plastic waste, illegal, undeclared, and unregulated fishing. At the same time, delegates talked about strengthening cooperation to ensure maritime security and safety in the region, including cooperation between law enforcement forces at sea.

Established in 1994, the ARF is an important platform for security dialogue in the Asia-Pacific. It aims to foster constructive dialogue and consultation on political and security issues of common interest and concern and to make significant contributions to efforts towards confidence-building and preventive diplomacy in the region. 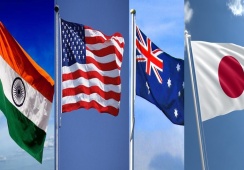