Building safe tourism for the future

Many localities have set up plans to welcome domestic and international visitors in the coming times.

Localities and tourism businesses are making great efforts to reopen the tourism economy in accordance with the Resolution 128 on safe adaptation, flexibility, and effective control of the Covid-19 pandemic released by the Government early this month.

The central province of Quang Nam, where is well known for Hoi An ancient city, has planned to reactivate tourism in early November 2021 with a focus on welcoming domestic tourists.

According to the Deputy Director of Quang Nam Department of Culture, Sports and Tourism, Le Ngoc Tuong, the plan will be conducted in four phases.

He said the first phase that is expected to kick off in early November 2021 will focus on welcoming domestic tourists. In the second and third phases (in December 2021), the province will welcome tourists from provinces and cities that have well-contained Covid-19.

In the fourth phase (from June 2022), the province will seek the government’s authorization to receive international travelers after analyzing the experience of Phu Quoc Island.

“Tourism activities of the province will basically be restarted in the last two months of this year. The border opening will strictly comply with provincial pandemic prevention and control rules,” Tuong affirmed.

Authorities in the central coastal province of Khanh Hoa, where is famous for Nha Trang coastal city, have set up a tourism recovery plan in the coming time, according to provincial Department of Tourism Director Nguyen Thi Le Thanh.

In addition to promoting intra-provincial tourism, from now until November 15, Khanh Hoa will welcome vaccinated tourists from other provinces. From November 16 to the end of December 31, Khanh Hoa’s tourism industry will completely return to the “new normal” state.

In addition, travel businesses have also implemented business recovery plans from the beginning of October.

A representative of Oxalis Company Limited stated that, with the consent of the People’s Committee of Quang Binh province, from now until June 30, 2022, the business will cooperate with the Quang Binh Department of Tourism to organize the program “Explore Quang Binh in the new normal”.

Deputy General Director of Vietravel Co.Ltd Nguyen Le Huong said that her enterprise has cooperated with the northern province of Ha Giang to launch a five-day-four-night tour titled “The quintessence color of the North - Ha Giang Province”.

She said this is the first inter-provincial tourism product of the company. Tourists will have a chance to experience famous tourist attractions in Ho Chi Minh City, Hanoi, and Ha Giang Province.

The tour will be organized in a closed procedure: travelers from Hanoi or Ho Chi Minh City on charter flights or charter buses will be picked up and taken directly to the booked sight-seeing spots in Quang Binh province without making stops along the way.

The “French architecture in the heart of Hanoi” walk launched by the Vietnam National Museum of History in cooperation with Hanoitourist Corporation on October 23 marked a good start for Hanoi tourism after the social distancing order was removed.

Since late September, local travel agencies have closely coordinated with relevant units to build up some tourism products that are suitable for the new situation.

Director of ITC International Travel Company Trinh My Nghe shared that the company is currently in cooperation with a number of tour operators to initiate two projects “Exploring Hanoi In One Day” and “Discovering Hanoi Autumn”.

....But lack of cooperation

Deputy Director of Hanoi Department of Tourism Tran Trung Hieu said that in order to support travel businesses to resume operations, thereby contributing to the capital's tourism total recovery, the department is focusing on improving the quality of cultural and tourism attractions and, at the same time, expanding the development of agricultural tourism, community care, health care, promoting the development of MICE tourism in addition to hosting large events.

Hieu was speaking at a conference on safe reopening for tourism held by the Ministry of Culture, Sports and Tourism in Hanoi recently.

“However, attracting tourists in the post-pandemic period requires businesses in the capital to introduce products with core values of unique local identity. At the same time, singular cultural traits must be promoted and the creation of unique experiences must be prioritized,” he said.

Given the context that localities each have made their own regulations on the prevention of the Covid pandemic, causing controversy over the concept of “safe tourism”, Truong Quoc Hung - President of UNESCO Travel Club Hanoi said that if each locality applies different “tourist safety” criteria, it will be difficult for the entire tourism industry to recover as expected.

Agreeing with Hung, Chairman of the Hanoi Travel Association Phung Quang Thang added that currently, some provinces and cities have only opened their doors to domestic tourists, while tourism is an industry of extreme inter-regional and inter-sectoral nature.“If no agreement is reached among localities on criteria for safe tourism, restoring travel after the fourth wave of covid-19 will not be possible,” he said.

“Reactivating tourism within the province only helps the locality to initially have a few visitors, but for tourism to truly recover sustainably, cooperation and coordination between localities is required” he stressed.

It is also suggested that the Ministry of Culture, Sports and Tourism issued a common standard framework for issuing green cards (for double-dosed people) and yellow cards (for those receiving one vaccine shot) before long.

From now on, it is imperative for localities to immediately restore transportation and create a functional “vaccine map”. This will help both tourists and locals feel more secure when going on a trip. 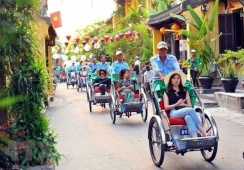