To ensure absolute safety for flight operations to, from and over the territories of Russia, Ukraine, and Moldova, Vietnamese domestic carriers are advised not to choose airports near war-affected areas.

The Civil Aviation Administration of Vietnam (CAAV) has advised Vietnamese air carriers not to take routes affected by the ongoing tensions between Russia and Ukraine and choose alternative itineraries if necessary.

The recommendation was sent to Vietnam Airlines, Vietjet, Bamboo Airways and Pacific Airlines after receiving a notice from the European and North Atlantic Office of the International Civil Aviation Organization (ICAO) on February 25 about the airspace closures in Moldova, Ukraine and Russia.

The document, signed by CAAV Director Dinh Viet Thang, states that Moldova has closed its airspace while Ukraine’s aviation authorities have announced the closure of airspaces in the flight information regions (FIRs) of Dnipro, Simferopol, Lviv, Odesa and Kyiv.

The aviation authorities of the Russian Federation also announced the closure of part of the airspace in the Rostov FIR and some other airspaces.

The ICAO said it will keep actively coordinating with the relevant authorities and other countries in the region to update the latest related developments, especially those affecting flight safety.

Director Dinh Viet Thang also said that he had received a report from the Vietnam Air Traffic Management Corporation (VATM) about the fact that aviation authorities of Russia and Ukraine have issued their Notices to Airmen (NOTAMs) on the closure of some airports, airspaces and flight legs, especially the area adjacent to the northeast of Ukraine.

To ensure absolute safety for flight operations to, from and over the territories of Russia, Ukraine, and Moldova, the CAAV requested Vietnamese carriers not to choose airports near war-affected areas as their standby ones.

“All local airlines must keep themselves updated with relevant developments from NOTAMs to avoid air routes, airspaces, and airports affected by the ongoing war between Russia and Ukraine,” Thang said.

He added that since the beginning of military tension between Russia and Ukraine, Vietnam’s aviation firms have excluded Ukraine and Belarus from their plans for flights to Russian and western European countries, so they have not been affected by the recent airspace closure by Ukraine. 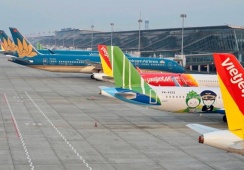