Prime Minister Pham Minh Chinh on November 8 called on the Cambodian National Assembly and its chairman Samdech Heng Samrin to supervise the two governments in the implementation of signed agreements.

The Vietnamese government leader said Vietnam and Cambodia should work to strengthen comprehensive ties and that there is still room for the two nations to improve the relationship.

The Vietnamese head of government wished that Cambodia successfully hosts the next ASEAN Inter-Parliamentary Assembly (AIPA) 2023 to be held in the capital Phnom Penh.

For his part, Cambodian chairman of the National Assembly Samdech Heng Samrin stressed that the visit of the Vietnamese Prime Minister would enhance the comprehensive long-term relations between the two nations.

He added that the visit shows the valuable support Vietnam and Prime Minister Pham Minh Chinh have for Cambodia as chair of ASEAN and AIPA in 2022.

The Cambodian politician also congratulated the Government and people of Vietnam, led by the Vietnamese Communist Party and General Secretary Nguyen Phu Trong, for making significant achievements in socio-economic growth and international integration.

He believed Vietnam would soon become an industrialized economy in the near future. The Cambodian official appreciated that the two prime ministers of Vietnam and Cambodia had a good discussion and that state agencies and businesses had signed 11 agreements on this occasion.

Speaking of cooperation, both leaders agreed that Vietnam and Cambodia must foster their comprehensive, long-term relations to benefit the two nations and peoples. 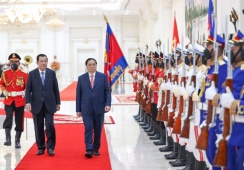 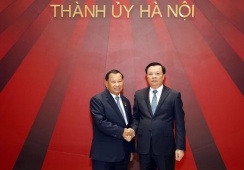