The introduction of the versions in Russian and Spanish marks a step forward for the Online Newspaper of the Communist Party of Vietnam (CPV).

This is the fourth and the fifth online foreign language publications of the CPV’s online  newspaper. It has already been published in English, French and Chinese, besides the main version in Vietnamese.

Readers in Russian can access the page at ru.dangcongsan.vn while Spanish readers visit es.dangcongsan.vn, vietnamamigo.vn for information in their languages.

The launching ceremony of the Russian and Spanish versions of CPV’s online newspaper was held on August 27 with the participation of Nguyen Trong Nghia, Secretary of the Party Central Committee, Head of the Communication and Education Commission of the CPV’s Central Committee.

Addressing the event, Nghia stressed that this meaningful event took place on the occasion of the 76th August Revolution anniversary and Vietnam’s National Day.

“The country is being faced with many opportunities but also challenges, especially in the context of the Covid-19 pandemic’s complicated situation.

This requires the Communist Party of Vietnam online newspaper to further improve the quality of its content, diversify its delivery methods, and better meet the propaganda work in the new situation,” he said.

Meanwhile, Tran Doan Tien, the editor-in-chief of the online newspaper Communist Party of Vietnam said that the launch of the Russian and Spanish versions was an initial success of the editorial board in its efforts to broaden international outreach. 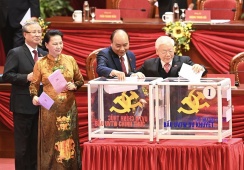 Communist Party of Vietnam names leaders for next five years